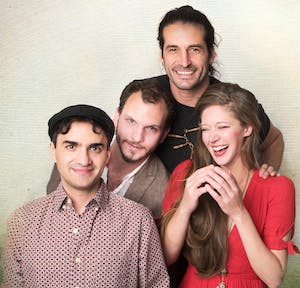 t’s difficult to impart the roots-steeped, road-trippin' essence of the Adam Ezra Group into a single word, but front man Adam Ezra nonetheless keeps one in mind as something of a mantra: COMMUNITY.

To the musicians at the heart of AEG, community is epitomized by a belief they all share, one that has long doubled as a mission statement for the group: namely, that making music together is itself a form of grassroots organizing, capable of nothing less than changing the world.

Such a groundbreaking concept makes all the sense in the world for a musical collective like AEG. After all, as Ezra sees it, the fans are really part of the band, active members of their movement who’ve always exercised a critical role in AEG’s ability to carry out its mission. This inclusive approach to musicianship, centered about respecting and celebrating their listeners above all else, Ezra insists, is what has allowed the group to explode out of their Boston-area origins to emerge as one of the most uniquely powerful, relentlessly entertaining live-music experiences in the country.

For their most recent studio release, Hurricane Wind (5/2017), AEG galvanized their community partnership by releasing 23 studio demos to fans, including multiple collaborations with John Oates of Hall and Oates fame. Ezra established an innovative framework through which fans could follow the process of song arrangement and studio tracking, help whittle the album down to just 11 polished final cuts, steer artwork creation, and assist in naming the project itself.

Even amid ballooning success, Ezra says it’s been not just easy, but natural for AEG to stay dedicated to its mission and true to its humble roots. Perhaps no song sums this up more than a fan favorite, selected to anchor that album. Called “I Believe,” it’s a gorgeously layered, nakedly emotional ode to the long path they’ve already traveled as a community - and to the wide-open road ahead.

You’ve got a style, that comes on like a hurricane wind,” sings Ezra on the track, backed by a group of musicians all equally engrossed in the material and attuned to its significance.

“You’ve got a spark, that lights the fire that never ends." With his next lines, Ezra speaks not only to the internal maxim that keeps him moving, but also to the enduring force for hope and change that his band has come to symbolize to its ever-swelling fanbase: “And in the times when hope is gone, you give me the strength to carry on - I know the path is long, but I believe.”

Standing on stage at the Count Basie Theater in Red Bank, NJ, singing backup for Bruce Springsteen and Jon Bon Jovi at a holiday benefit concert, it was hard for Lisa Bouchelle to not to drift back to the many days she spent singing while growing up. In those childhood days, however, she was singing for quite a different reason.

Although both her parents loved her dearly, they fought constantly with each other. Her mother was an alcoholic, and her father, who had to leave school in the 8th grade, worked three jobs just so the family could get by. It almost seemed like the only time the arguing would stop was when little Lisa sang. “It seemed like they would smile and be happy when I sang,” recalls Lisa. “That’s the only time everything seemed OK.” So Lisa would sing as much as she could, and whenever she could.

Lisa had started singing during the long car rides the family would take. Without any money for entertainment, her dad would take the family out for drives in the country, singing to the radio. Her father had a majestic voice, and Lisa tried to emulate him. Then one day at a campground, they announced there would be a talent contest. Lisa’s grandmother dressed her in an American Flag costume to go with the song she would perform, “America The Beautiful.” Because Lisa, at four years of age, was so much smaller than everyone else, they put her on a picnic table so she could be seen. To her, it was her first real stage. Lisa won the contest, and knew at that moment she wanted to be a famous singer when she grew up.

That’s also when she realized that she could make a lot of people happy with her voice, besides just her parents. Standing on that stage this past winter with Bruce and Jon, she realized she was living her dream. People were smiling and applauding, and she knew her parents were looking down and smiling also.

Alcoholism had taken her mother from her, and her father died soon after from complications during a heart operation. Coincidentally, her father had taken ill on the night they were to do their first public performance together, a duet they had rehearsed for weeks.

Now alone in the world, Lisa set her sights on fulfilling her dream, and making her father proud. She played in every local coffeehouse and bar, sometimes seven nights a week. She sent her songs to everyone she could. She sang in local “open mic” talent nights. A local music writer saw her at one of those, and saw something special in her. He took an interest, and brought Lisa to a benefit show that featured Jon Bon Jovi. Lisa actually reached out and touched Jon’s jacket just so she could feel what it was like to be next to a real rock star.

Never did she dream that she would soon be recording with some of the top people in the industry, and working on songs with noted songwriters. The songs are a glimpse into Lisa’s soul; a mix of the hopeful, laughing young woman she is today, and the bittersweet memories of the little girl on the picnic table.

Lisa’s latest EP, Lipstick Tomboy (INGrooves Music), has over 2 million streams on Spotify. The first single, a duet with John Popper of Blues Traveler, has over 140,000 views on YouTube, and the latest single debuted on AXS.com and has over 110,000 views.

But Lisa’s real love is the stage, and she has kept a busy schedule of over 200 dates per year. She has sung backup for Bruce Springsteen, and dueted in concert with Jon Bon Jovi on his hit, “Who Says You Can’t Go Home.” She has toured with and/or opened for Meat Loaf, Blues Traveler, Bryan Adams, Shooter Jennings, Train, Ingrid Michaelson, Colbie Callait, Jason Mraz, the Nitty Gritty Dirt Band, America, Don Felder of The Eagles, Richard Marx, John Waite, and many others.

In addition, Lisa has also managed to find time to create and host the TV show “Rock Star Kitchen,” in which she schmoozes with platinum selling artists in her kitchen, talking about music and touring, while cooking up their favorite dishes. Guests have included Foreigner, Eddie Money, Chubby Checker, Lita Ford, Tonic, Candlebox, Theory Of A Deadman, Bowling For Soup, Night Ranger, and Peter Mayer from Jimmy Buffett’s Coral Reefer Band, among others. The show has become the top-rated original content show on The Comcast Network in the Philadelphia region. Lisa also appeared in the hit TV show Gossip Girl, and had a starring role in an off-Broadway production.

Lisa’s background has made her very conscious of the plight of others who have difficult circumstances. She co-wrote and co-produced the charity single “Restore The Shore,” which benefited the victims of Hurricane Sandy, and featured members of prominent Jersey shore groups such as the E Street Band, Bon Jovi, Southside Johnny, and others.

She also works with several major charity musical groups. One is the nationally known group “Holiday Express,” which plays over 50 shows every November and December at homeless shelters, for aids patients, handicapped children, and other disadvantaged individuals. Another is the Philadelphia chapter of Musicians On Call, for which she goes once a month to an area children’s hospital, singing for the children that are suffering from very serious diseases. Lisa says she gets as much out of it as the children do, sometimes moved to tears, such as when a bedridden little girl, who hadn’t smiled in a very long time, started singing with Lisa on Katy Perry's "ROAR"... "I got the eye of the tiger, a fighter... You're gonna hear me roar!"