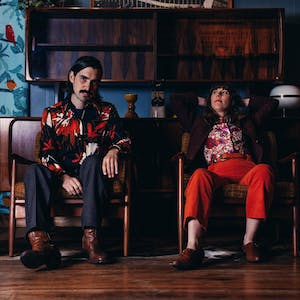 Their 2017 self-titled debut album has given life to the future of country music and received praise from critics across the nation for its poignant songwriting, acute sensibility and expansive interpretation of alt-country. Seamlessly bridging the Bakersfield and Countrypolitan sounds with elements of modern Americana, the record encompasses everything that made country music matter.

​ ​In their eighth year of making music together, Arnez and Stewart have become a nimble creative unit, adept at exploring heartache and hope with time-tested Honky Tonk humor. They have toured throughout the US, sharing the stage with with the likes of The War & Treaty, Sarah Shook & the Disarmers, Junior Brown and Town Mountain. Blue Cactus conjures a sound that will take you on a familiar journey into uncharted country, expanding tropes and breathing hope into the genre's limitless possibilities.

Chris Frisina was born in the rustic town of Olean, New York to a family of northeastern wiseacres and intelligent hillbillies who remain hell bent on living full, rich lives despite brutal winters in a persistent economic downturn. Runt of the litter, according to his only sister.

Not one to commit easily, he skirted the compulsive hunting and fishing tradition held close to his father’s heart - instead cultivating a sensitivity more suited to artists and vagabonds. In illustrations, his pen swirl meanders towards an eventual finish only understood upon completion – just as in his music.

In songwriting, Chris uses what can only be explained as a genetic link to ancestral angst and talent to search for his place in a world out of sync. Part unquiet soul. Part young fool. Chris hopes to share his observations on our shared journey through life in mutual search of something pure.

Chris continues to pull from a constant and pervasive sense of disquiet–gleaned from his childhood, solo travels, work experiences, sullen periods of insomnia and close friendships–to create mournful tones, pulsing with lost opportunity, longing and regret. Except for those few magical times, when it goes the other way.