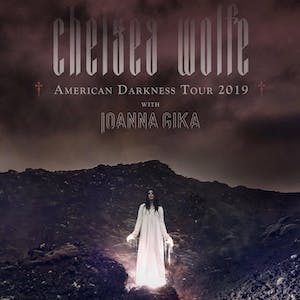 Chelsea Wolfe has always been a conduit for a powerful energy, and while she has demonstrated a capacity to channel that somber beauty into a variety of forms, her gift as a songwriter is never more apparent than when she strips her songs down to a few key components. As a result, her solemn majesty and ominous elegance are more potent than ever on Birth of Violence.

There is a core element to Chelsea Wolfe’s music—a kind of urgent spin on America’s desolation blues—that’s existed throughout the entirety of her career. It manifested in the lo-fi bedroom recording experiments of her debut album The Grime and the Glow (2010), the electrified dirges of Apokalypsis (2011) and Hiss Spun (2017), the electronic embellishments and distorted growl of albums like Pain is Beauty (2013) and Abyss (2015), and the sparse acoustic arrangements of Unknown Rooms (2012). At the center, there has always been Wolfe’s woeful longing and beguiling gravity, though the framework for compositions has continuously evolved based on whatever resources were available. Her austere beginnings were gradually bolstered by electronics and filled out with full-band arrangements. The music became increasingly dense and more centered around live performances. And while these lush recordings have in many ways magnified her power, the elaborate renditions create a dichotomy given the private and isolated nature of her art. Her latest album, Birth of Violence, is a return to the reclusive nature of her earlier recordings, written and recorded in the solitude of her remote home in Northern California.

“I’ve been in a state of constant motion for the past eight years or so; touring, moving, playing new stages, exploring new places and meeting new people—an incredible time of learning and growing as a musician and performer,” Wolfe says of the era leading up to Birth of Violence. “But after awhile, I was beginning to lose a part of myself. I needed to take some time away from the road to get my head straight, to learn to take better care of myself, and to write and record as much as I can while I have ‘Mercury in my hands,’ as a wise friend put it.“ Birth of Violence is the result of this step out of the limelight. The songs stem from humble beginnings—little more than Wolfe’s voice and her Taylor acoustic guitar. Her longtime musical collaborator Ben Chisholm recorded the songs on a makeshift studio and helped fill them out with his modern production treatments and the occasional auxiliary flourish from ongoing contributors Jess Gowrie (drums) and Ezra Buchla (viola). While it’s tempting to draw a comparison to Wolfe’s acoustic collection Unknown Rooms, Birth of Violence is a far cry from the unplugged nature of that album. Instead, it feels like an exploration of one of Wolfe’s strongest facets—her ties to the American singer-songwriter tradition.

The album opens with “The Mother Road,” a harrowing ode to Route 66 that immediately addresses Wolfe’s metaphoric white line fever. It explains the nature of the record—the impact of countless miles and perpetual exhaustion—and the desire to find the road back home, back to one’s roots. Songs like “Deranged for Rock & Roll” and “Highway” offers parallel examinations on the trials and tribulations of her journeys while the ghostly “When Anger Turns to Honey” serves as a rebuttal to self-appointed judges. Wolfe sees these ordeals as a part of a musical tradition, and rather than using her music as a confessional or diary, she tethers her experiences to age-old themes. She touches upon the original transcontinental travellers crisscrossing the country on state highways in search of some new kick, the psychedelic caravans on a mission to Further, and the vagabond busker whose home is both everywhere and nowhere.

While the record touches upon tradition, it also exists in the present, addressing modern tragedies such as school shootings in the minor-key lullaby “Little Grave” and the poisoning of the planet on the dark wind-swept ballad “Erde.” But the record is at its most poignant when Wolfe withdraws into her own world of enigmatic and elusive autobiography. Much like Alan Ginsberg’s hallucinatory long-form poem Howl, the tracks “Dirt Universe” and “Birth of Violence” weave together specific references from her past into an esoteric overview of the state of mankind. The songs describe an internal awakening of feminine energy, a connection to the maternal spirit of the Earth, and a defiant stance against the destructive and controlling forces of a greedy and hostile patriarchy. Though the lyrical minutiae remain secret, the overall power of the language and delivery is bound to haunt the listener with both its grace and tension. In keeping with the general approach of the album, it thrives by culling from the familiar language of American country and folk music while setting it within Chisholm’s scenic soundscapes.

Every Chelsea Wolfe album introduces new unorthodox textures and approaches, and the trajectory of her creative arc has generally aimed for larger and more imposing sounds, but Birth of Violence deliberately alters that course in favor of a more intimate atmosphere. “These songs came to me in a whirlwind and I knew I needed to record them soon, and also really needed a break from the road,” Wolfe says. “I’ve spent the past few years looking for the feeling of home; looking for places that felt like home. That was the initial inspiration to record it on our own—between Ben and I, we had all the tools and instruments to capture what we wanted to create.” The result of that humble approach yields Wolfe’s most devastating work to date. Sargent House is proud to offer Birth of Violence to the world on CD/LP and digital formats on September 13, 2019.

To best understand Ioanna Gika and the world that she has created, it is best to shatter all that you know to be reality and toss on a druid robe as you embark on a personal journey of monastic sorcery. There is something witchy and transformative about her music which has been easily captivating to new audiences. The music bares something traditional while bridging into soft techno undertones that has created such a strong narrative for those who balance the moods of raving and meditating.

Her album Thalassa, released earlier this year, is an amalgamation of the conflicting feelings she had experienced while going through a break up as well as coping with familial sorrows. Taking refuge in Greece to write the album, the musician took to her Greek mother-tongue as well as English to construct her poems which were amplified through her vocals which evoke spirits of sirens songs. Hey lyrics have even been quoted by Booker Prize winner Arundhati Roy in her best-selling book The Ministry Of Utmost Happiness. These unified layers of complexities pared with previous collaborations with electronic maven and Grammy nominated TOKiMONSTA can be heard throughout as the album slips and slides through the varying emotional extremities.

Having recently come back from a spring tour opening for Garbage, we managed to slip in words with Gika ahead of her recent announcement of a fall tour with Chelsea Wolfe.