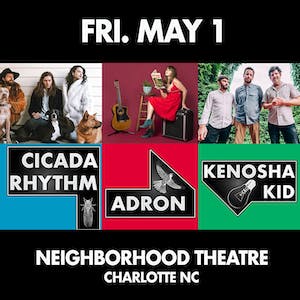 Born and raised in Georgia, this talented pair imitates and modernizes folk music to a rejuvenating degree. The sound of Andrea DeMarcus and Dave Kirslis exhibits skilled and articulate guitar picking honed in the dive bars of Atlanta over rolling Julliard-trained bass lines. Expect chilling harmonies, unbridled enthusiasm, some wholesome tunes and a sincere performance.

Based in the humid indie-rock haven of Athens, Georgia, Kenosha Kid has supplied the world with their own unique blend of modern-jazz-meets-college-radio for over a decade. In 2004, bandleader Dan Nettles emerged with a flame of inspiration, a worldwide host of collaborators and a focused sense of purpose: Build a scene, write for people you know, and listen to your creative heart regardless of music idiom. Nettles has been doing just that for over a decade, on his own terms and in multiple locations.

Starting with the release of Projector [2005], Kenosha Kid has provided a steady string of content: a DVD/CD package featuring an all-new score for Buster Keaton’s silent film Steamboat Bill, Jr [2008], the vinyl release of Fahrenheit [2009], the creation of an extensive Bandcamp archive which houses over 40 live shows, the powerhouse twin sonic pillars Inside Voices [2015] and Outside Choices [2017], and most recently in February 2019 Missing Pieces, which features a striking two-guitar incarnation augmented by three-piece string section.

Now in early 2020, Kenosha Kid morphs back into a trio incarnation and features Nettles alongside relaxed veterans of varied musical scenes, Seth Hendershot on the drums and Luca Lombardi on acoustic bass.

“A mash-up between contemporary jazz, alt-rock and jam-band ethos, Kenosha Kid cast a wicked spell… Nettles… is an understated yet arresting guitarist and an accomplished composer with an ear for a good hook…” – All About Jazz

“Missing Pieces resonates… a cycle of broken quietude that’s gently settling into place… Throughout Kenosha Kid’s nearly 15-year existence, Nettles has written hundreds of songs, yet few resonate as profoundly as anything on Missing Pieces… as he shows in his own impenetrable and postmodern way, the only way out is through.” –Flagpole Magazine

“…free from labels and genre…the Athens, Georgia quartet is out with their strongest release yet… [a] heady journey of rock, prog, jazz and funk” –JamBase

“It’s an airy trip that fills every space with lush instrumentation while also leaving plenty of room to feel every twist and turn that Adron’s assured hand has mapped out.” – Billboard Magazine on Adron’s latest record Water Music