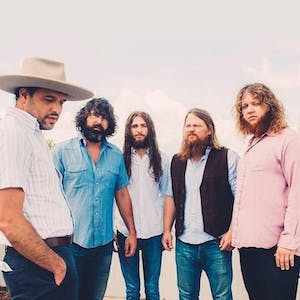 Rooted in triple-stacked harmonies, southern storytelling, and cosmic country twang, Cordovas create their own version of American roots-rock with That Santa Fe Channel.

The album marks the band's ATO Records debut, arriving after more than a half-decade's worth of international touring, communal living, and shared songwriting sessions. It's a timely - and timeless - version of a sound that's existed for 50 years, ever since pioneers like the Grateful Dead and the Allman Bothers Band blurred the lines between rock, country, and amplified folk music. If That Santa Fe Channel nods to the band's influences, though, it's still a fiercely unique album, recorded in a series of live takes that shine a light not only on Cordovas' songwriting chops, but their strength as a raw, rugged live band, as well.

That Santa Fe Channel was produced by the Milk Carton Kids' Kenneth Pattengale in East Nashville, not far from the home that doubles as the band's rehearsal space, headquarters, and shared living quarters. There, in a converted barn behind the property's main house, the guys logged countless hours fine-tuning a sound that's already earned praise from outlets like NPR Music and Rolling Stone, who described the group as "the harmony-heavy, guitar-fueled house band at a Big Pink keg party in 1968." With its western wooziness and siesta-friendly swagger, That Santa Fe Channel also nods to the band's other home bases: Southern California, where bassist and band leader Joe Firstman lived for years; and Todos Santos, Mexico, where Cordovas' five members travel every winter to write new songs, sharpen old standbys, and oversee the acclaimed Tropic of Cancer Concert Series. The result is a record that's steeped in - but not limited to - southern sounds and California charm. It's American music without borders.

Years before Cordovas' formation, Firstman traveled the country as a solo musician. Raised in North Carolina, he moved to Hollywood as a determined 20 year-old, signing a major-label deal with Atlantic Records in 2002. His debut album, War of Women, hit stores one year later. When a dizzying blur of acclaimed shows - including opening dates for Sheryl Crow and Willie Nelson - weren't enough to satisfy the expectations of a big-budget record label, Firstman lost his contract and took a new job as music director on Last Call with Carson Daly. It was good work, with Firstman performing nightly alongside first-rate musicians like Thundercat and Kamasi Washington. Still, the need to create his own music was ever-present. With Cordovas, he's found his ultimate vehicle: a collaborative band with multiple lead singers and a collective approach not only to songwriting, but to existing. Cordovas aren't just bandmates. They're roommates. They're co-conspirators. They're a family.

"The Cordovas are a 24-hour, 7-days-a-week job," clarifies Firstman, who shares the bandd's roster with drummer Graham Spillman, keyboardist Sevans Henderson, and dueling lead guitarists Lucca Soria and Toby Weaver. "You're always on call to play, to adapt to another man's idea, to pick up a guitar or look at a lyrics sheet. We're eating dinner together, hanging out together, and making art. We don't have rehearsal times, because rehearsal is always. You have to honor the art first, and everything else comes second."

Living in such close quarters - both at home and on the road - has turned Cordovas into a band of brothers. Stop by the band's East Nashville compound and you may find Soria and Weaver picking their way through bluegrass songs inside the barn, while Firstman wraps up family dinner in the kitchen and Spillman fixes the band's RV outside. There's a communal vibe to the band's existence that bleeds over into their songs, where it's often hard to pinpoint a single person's voice in those thick, swooning harmonies. That Santa Fe Channel is the soundtrack to that communal existence: a collection of songs written together, performed together, and lived together.

And what a soundtrack it is. There's the Band-influenced boogie-woogie of "Standin'; on the Porch," full of blue notes and pedal steel. There's the layered melodies of "I'm the One Who Needs You Tonight,: the classic chord changes of "Selfish Loner," the barroom piano of "Step Back Red," and the hungover charm of the album's opener, "This Town's a Drag," which finds Firstman searching for illegal thrills in a dry town. Together, That Santa Fe Channel's nine songs paint the picture of a band on the rise, heading for a horizon whose beauty can match their own.

A fixture on the Americana music scene for nearly two decades performing solo and with his now retired band, The New Familiars, among others; Justin Fedor unveiled his new country band dubbed Fedor (fee-door) & The Denim Denim at the 2019 Bristol Rhythm & Roots Reunion. With a lineup of Charlotte, NC standouts sometimes including, pedal steel, fiddle, keys, upright bass, and drums; the sextet performed new material from Fedor’s forthcoming album as well as old familiar tunes in a new light. The band is touring in 2020 in support of the new album.

In Charlotte, Fedor also continues his work organizing and hosting #TributeToBenefit Levine Children’s Hospital. A semi-annual concert held at Neighborhood Theatre in Charlotte, NC; the themed benefits showcase both local and national bands performing covers to help raise tens of thousands for the hospital. Now in it's seventh year, the series is slated to have Tyler Ramsey headline the December 13th show.

As 2019 began, Fedor was recruited to join former Līve frontman, Chris Shinn, on bass for his new project. The inaugural tour featured heavy hitters Christopher Thorn (Blind Melon) on guitar and rock and roll hall of famer, Dave Krusen (Pearl Jam/Candlebox) on drums, as they supported Blind Melon on a northeast tour. Currently, Fedor is gearing up to play bass for Shinn supporting OURS on their US dates in November and December. During their downtime, Shinn has been helping Fedor record his next album.