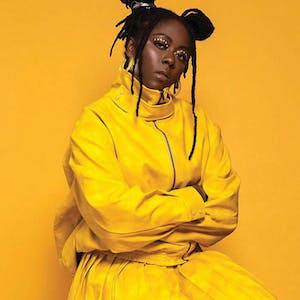 A smooth and cheerful aura combined with unique style and therapeutic vocals, Cyanca is gaining momentum with some of music’s best critics such as Teen Vogue, 2DopeBoyz, NPRMusic, Lyrical Lemonade, and Revolt. Her personality and eccentric style capture your attention, but her voice commands it. The honesty in her music stems from personal experiences and Cyanca believes packaging and delivering her heart to listeners will provide them comfort, energy, and a heightened love of self.

Cyanca’s latest project I’m Staying Home hosts a triple feature of deeply personal records relatable to most. Diving into addiction, grief, and foundation, she draws you in with staggering keys, unforgiving bass, and a melody full of self care. The standout track, “Patti Mayonnaise” bloomed after quick research of the cartoon “Doug” revealed she and Patti were more alike than she ever thought, hence the lyrics “We’re kinda similar in different ways.” Check out the video here. Cyanca is set to release Isle of Queens Deluxe Summer 2020 which features two remixes of “Eat” and “New Phone” with features from Elevator Jay and Durand Bernarr.

The Summer and Fall of 2018 set off a turning point for Cyanca as she was booked for three music festivals; Made From Scratch headlined by Reese LaFlare and Elhae, The Black Mecca where she opened for Kari Faux and SiR, and the widely known A3C Festival and Conference where she performed on the Toyota Sound Garage stage headlined by Trina, Talib Kweli, Saweetie, and Lute. She also played her first LA show opening for Ill Camille at The Echo. To end 2018 on a monumental note, Old Man Ebro, industry veteran, premiered her single “New Phone, Who Dis” to be added to his branded playlist “Discovered on Apple Music.” In February 2019 following a connection made at A3C, Cyanca was invited to perform at Facebook’s Headquarters outside of San Francisco. Cyanca has also performed alongside Tweet, The Hamiltones, and The X-Men Band.

Cyanca plays a crucial role in Charlotte’s current “urban music renaissance.” In February 2020 she was contacted by Teen Vogue to be featured for a story showcasing emerging artists and how they build in their respective cities. She has been featured on Dreamville’s very own Lute’s “Ambition (Queen City Remix),” Erick Lottary’s “You Can Tell” project, and Erick’s single “Replay” which landed on The Realest Down South playlist on Spotify. Making her mark as a Queen in the “Queen City”she graced the cover of local arts magazine Creative Loafing in July 2018. She was also a featured guest on the Local Vibes podcast and Amplifier podcast for NPR 90.7 WFAE in Charlotte. In April 2019 she was awarded Best Musician 2019 by Charlotte Magazine. With a few distribution offers on the table, Cyanca is THE artist to watch, follow, and support.

Her hit single "New Phone, Who Dis" is a testament to continuously moving forward through your personal grind. Ignoring distractions [people] who aren't vibrating on the same wavelength, Cyanca sings, "If you really ain't tryin' to grind we can't be textin'." Accompanied by a stunning visual, Revolt quotes: “Accentuating the song perfectly, Cyanca’s new clip is colorful and detailed with a hint of boldness that makes it all pop just enough.” "New Phone Who Dis," is nearing 35K views on Youtube, 113K plays on Audiomack, and 153K on Soundcloud. "New Phone, Who Dis" was featured on Old Man Ebro's "beats1" radio show in November 2018 and "Patti Mayonnaise" featured in July 2019. “New Phone” is still pulling its weight as it was recently added to Audiomack’s Official R&B playlist in April 2019 and added on EscapeTracks in June 2019.

Born and raised in Smithfield, North Carolina by her grandparents and cultivated in the church, Cyanca is not your typical “Southern Belle.” At six years old Cyanca found her voice and discovered she was great at playing the drums; she would later teach herself to play the piano. Influenced by acts like D’Angelo, Erykah Badu, and A Tribe Called Quest, Cyanca perpetuates the meshing of jazz within an R&B constraint. Not only is Cyanca a singer-songwriter, she is also a self-taught producer. Her production style is influenced by Ryan Leslie, Missy Elliott, Pharrell and Swiss Beatz. She states, “Swizz taught me to never delete anything I create because it could be worth gold later. Pharrell taught me how to expand my piano chords. Ryan taught me to make songs not beats.”