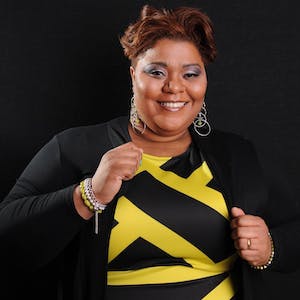 Founder of Pure Heart Media, Cincinnati native and now resident of Charlotte, NC, Doneta Dawson is a Wife, Mother, Worshiper, singer/songwriter, teacher, author, minister and Prophet. She has been given rave reviews for arrangement of music, powerhouse vocals with range, and piercing clarity, and writing ability. She is known for carrying the presence of heaven through worship, teaching, and speaking to shift atmospheres and prophetically flow in song also with arts ministry.

She released her Debut CD project ‘R&B Repent & Believe’ with much success and great reviews and has recently release New Single "I Am I Take Authority" and "Sovereign" as she works on her sophomore debut. She expounds and teaches foundational classes on the Kingdom of God and how it ties into worship, with prophetic activation. She has completed and has published her first ever book ‘Worship Unprecedented…Kingdom foundations in worship’.

She has in the past conducted the S-T-R-E-T-C-H prayerline as well as the expansion to formerly host a radio show on The S-T-R-E-T-C-H which encourages stretching out on the promises of God to have the capacity to receive that which He has for us, a challenging exploration that builds the character of the kingdom citizen.​

As 2014 CWIMA (Christian Women in Media Association) Songwriter of the year finalist, she has also received awards from the Black Essence Awards, and The Gospel fest of the city of Forest Park, OH.

She has interviewed on syndicated television and radio shows such as "Bobby Jones Presents" on the Impact Network, Inspirational Baptists church’s City of Destiny Womens conference, The Word Network, the Tamika Hall Show on IHeart Radio, New York’s The Yes Hour Christian Hip Hop Radio Station and more. Sharing the stage with powerful ministers such as Pastor Jackie McCoullough, Psalmist Doris Stokes, Psalmist Raine and Pastor Phil Tarver, she has ministered praise and worship, deliverance, and intercession. Doneta ministers in conferences, revivals, live shows and has been said to bring in the presence of God setting the atmosphere for heaven to invade earth. She is known for her prophetic ability to sing songs of the Lord and flow through worship.

Her music, teaching, speaking is loved all over the world.

Singing professionally since the age of 14 she has always had a way with bringing an energetic passion to the audience in Song and dance. Over the years singing in Church, Grade, Jr., and High school choirs, forming girl groups to sing R&B (Finesse) and Rap Groups she's always had a knack for performing and giving the people a great show. After giving her life back to Christ at the age of 22 she began to do what came natural to her once again, Praising and Worshiping God in the song. She directed a youth women’s choir, girl group ‘Lilies of the Valley’, as well as leading with a dynamic praise and worship team later turned gospel group R.O.G. (Reflections of God).​

Accepting the call of a Prophet in 2008, she was then cast into a journey with God that has forever transformed her life. Anointed with deliverance in her voice, Doneta Dawson ministers in Prophetic song, preaching, teaching, and exhortation

Her Mission is to bring the Kingdom of God to infiltrate the world through the pure heart of worship via music, expression, and any other venue opened to her. She is ready to bring a Kingdom Sound to the World.

Rev 11:15 The kingdoms of this world are become the kingdoms of our Lord, and of his Christ; and he shall reign for ever and ever.