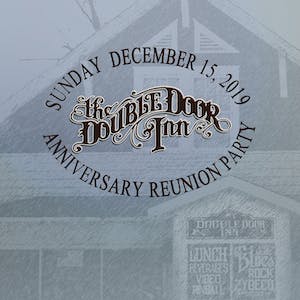 For over 43 years, the Double Door Inn was more than an old house on Charlottetowne Avenue. It was recognized as one of the oldest blues music venues in the United States, bringing in musicians of all genres to Charlotte, NC. It was the place that you went to hang out on Friday afternoon, or Saturday night. To meet old friends, and make new ones.

What had once been the house built by the Wearn family, one of the prominent families in Charlotte during the early 20th century, become the home of the Charlotte music scene, and the place where owner Nick Karres oversaw countless nights of music and memories.

While we cannot bring it back, this show is a homecoming for the many that had the Double Door Inn pass through them, just as much as we passed through it. On the week that the venue would have celebrated its 45th anniversary, we bring together two of the most famous names in the Double Door¹s history. The Lenny Federal Band, and the Monday Night All Stars.

We also welcome back Nick Karres and his family, who have been part of our own extended families for many years.

Gather, return, and let the music play on.

The Lenny Federal Band, formerly of the ... wait for it ... Federal Bureau of Rock 'n' Roll (yes!) was, along with his musical (com)patriots, a staple in the burgeoning Charlotte rock scene of the '70s and early '80s. Known for its brand of relatively straightforward bluesy originals and for its good taste in classic cover tunes, the Federal Bureau always resisted making the move to the Allman Brothers-like sound so many of their Caucasian compatriots did, in favor of keeping it simple. Federal, a cornerstone cog in the Charlotte music scene, hasn't changed that recipe a whole lot of the years. Forgive the food metaphor, but it's musical meat and potatoes you're getting here – meat and potatoes slow-cooked with plenty of care, and with but a soupcon of spice.

The All-Stars were a Monday night tradition at The Double Door Inn.

It all came about when Les Moore said "How ’bout me getting a few of my buddies (also some of the best Charlotte musicians) together to form a band to play off-night Monday night?" And The Double Door Inn said go for it! Never in the history of the Charlotte music scene has a group come on so strong to draw a crowd and develop a fan base on a Monday night. Most people thought it could never happen on Mondays in Charlotte.

The MNAS's, band members offer up their take on a variety of cover songs (the set list runs the gamut from Bob Marley to Earth, Wind & Fire). A diverse, and often large, crowd will dance and sing along, sometimes dropping their jaws at the talent that's present on stage. They don't call them "All-Stars" for nothing.

Crisis is a pop rock band from Charlotte, NC. The band formed in 1996, featuring core members Randy Franklin, guitar and vocals, Ed “Wolf “ Leitch, lead guitar, and Tommy Franklin, drums and vocals. A variety of talent has the filled the role of bassist including Bobby Hodges, Henry Pharr, and most recently Mike Clark.

The band has recorded 5 albums in the past decade; (produced by Jamie Hoover) gathering rave reviews from music critics and fans alike. They have also played many live shows throughout the southeast, sharing the stage with such notable artist as Don Dixon, The Spongetones, Mitch Easter, The Smithereens, The Posies, and Jill Sobule.