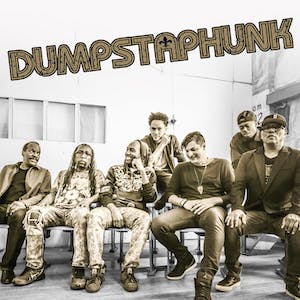 "Dumpstaphunk has grown from a small side project into one of New Orleans' most prestigious modern funk ensembles." ~ Rolling Stone Magazine

"One of the hippest funk bands in the land." ~ Guitar Player Magazine

"The colossal low end and filthy grooves they threw down from the Gentilly Stage must have set a Jazz Fest record for one of the baddest bass jams ever." ~ Bass Player Magazine

Dumpstaphunk stands out amongst New Orleans' best, cementing themselves as one of the funkiest bands to ever arise from the Crescent City. Born on the Jazz & Heritage Festival stage, and descended from Neville and Meters family bloodlines, these soldiers of funk ignite a deep, gritty groove that dares listeners not to move. Their performances combine ingenious musicianship through complex funk, rock, and jazz arrangements accompanied by soulful melodies and Big Easy traditions.

Dueling baselines from Tony Hall and Nick Daniels III set off one of the dirtiest rhythm sections on the planet, while Ivan Neville lights up the Hammond B3 keys and cousin Ian Neville's funky guitar riffs send the groove into overdrive. Dumpstaphunk tosses around lead vocals and four-part harmonies the way Sly & the Family Stone did, but with three studio albums under their belt, Dumpstaphunk stands on the merit of their own material. The band recently welcomed their newest members to the quintet, Devin Trusclair on drums and horn section Alex Wasily on trombone and Ryan Nyther on trumpet, rounding out a 7-piece arsenal. Dumpstaphunk’s most recent single and music video for "Justice" featuring friend Trombone Shorty, conveys a message to fight for equal opportunity and the right to a decent life for all humans. The band is currently in the studio working on their fourth studio album, with plans to release later in 2020.

Dumpstaphunk has performed at the New Orleans Jazz & Heritage Festival every year since 2003 and continues to tour all over the world. The band was honored to recently support The Rolling Stones in New Orleans at the Superdome, as well as on the road with George Clinton & The Parliament Funkadelic for his farewell tour. Dumpstaphunk has performed on hundreds of festival stages like Bonnaroo, Dead & Company’s Playing in the Sand, Lockn Festival, Jam Cruise, NYC’s Summerstage, Byron Bay Bluesfest and Fuji Rock Festival; and you never know who may appear as a guest on stage with the band on any given night. Guest appearances have included Carlos Santana, Bob Weir, Chaka Khan, John Oates, Lukas Nelson, Dean Ween, Jerry Harrison, Trombone Shorty, Marcus King, Tower of Power and the list goes on. For more information, visit www.dumpstaphunk.com

“Dumpstaphunk’s groove is a unique monster. It's not the minimalist funk of the Meters and it’s not the relentless funk of James Brown, although it has that rhythmic drive. It's not the psychedelic, over-the-top circus of Parliament Funkadelic, but it often has that political slant. It's not the party funk of the Ohio Players, but it shares the high vocals that take the pressure off the bottom. Dumpstaphunk is a whole other school of funk. If you're under 35, you think you've seen funk, but you haven't. You missed the original Meters, James Brown when he wasn't a parody, Parliament Funkadelic’s landing of the “Mothership”, Sly and the Family Stone before he went M.I.A and Booker T. and the M.G.s before the demise of Stax. Dumpstaphunk is as good as all that, and they're in their prime now.” ~ The Gambit Weekly