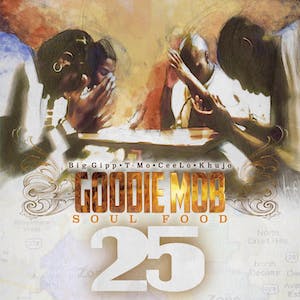 The pioneering Southern hip-hop group, Goodie Mob, is one of the most celebrated rap acts to come out of the hip-hop hotbed of Atlanta, GA. Formed in 1991, Goodie Mob’s original and current group members include CeeLo Green, Big Gipp, Khujo, and T-Mo, who all grew up together in Atlanta alongside the rest of the Dungeon Family - the musical collective of Southern rappers which includes Andre 3000 and Big Boi of Outkast, Goodie Mob, Organized Noise, and Parental Advisory. After officially joining forces in the early 90s, Goodie Mob put out their debut album Soul Food in 1995, which was certified gold in the US and is recognized as the album that put Atlanta’s rap scene on the map. It was also on their debut album that the phrase “Dirty South” was actually coined and the group also showed fans that they were different by rapping about heavy social and political issues such as racism, discrimination, geo-politics, and gentrification. After the success of Soul Food, Goodie Mob then later released two more albums, Still Standing (1998), and World Party (1999), which were both also certified gold in the US.

Now after 14 years, Goodie Mob is back in the studio finishing a new album entitled, Age Against the Machine, which will be released on August 27th, 2013. The first single off the forthcoming album is entitled “Special Education” featuring Janelle Monae, available on iTunes June 18th, and the new album will also feature fellow-Atlanta native T.I.

The last time fans heard from Goodie Mob was the release of their one-off single “Fight To Win”, which hit iTunes over the summer of 2012 and is an anthem of liberation, motivation and determination to always fight to win in life (a motto that the Goodie Mob lives by). Goodie Mob premiered “Fight To Win” on NBC’s hit show The Voice with an explosive performance in April 2012. Goodie Mob was also invited to perform the new single at the 2012 Billboard Music Awards, as a tribute to The Beastie Boys and the late Adam “MCA” Yauch. Additionally, basketball fans will recognize “Fight To Win” as the Official 2012 NBA Playoffs theme song,

and the track was also featured in the campaign to release the Samsung Galaxy SIII.

In February 2013, Goodie Mob surprised their fans by taking the stage during CeeLo’s Las Vegas residency show “CeeLo Green is Loberace” which is live at Planet Hollywood until April 13th, 2013 and is rumored to return for a second run later in the year. The southern rappers will also appear in an upcoming television commercial campaign for the Las Vegas Tourism Board and additionally have a reality TV show in development.