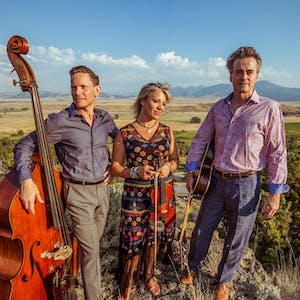 “The hot jazz is what Hot Club do best, and this is a staggering return to form for the band I once said I could listen to forever. That still stands.” – Country Music People

Since 1998, the Western swing-gypsy jazz trio Hot Club of Cowtown has traveled the world bringing their own brand of magical musical chemistry to audiences far and wide. Along with Elana James, guitarist Whit Smith and bassist Jake Erwin are equal partners in this original marriage of gypsy-jazz-inspired by the music of Django Reinhardt — which accounts for the “Hot Club” portion of their name — with the hoedowns, traditional tunes, and Western swing-inspired music of Bob Wills and the Texas Playboys, represented in the “Cowtown” of their name. They have created a legacy of the preservation of musical traditions that have often been overlooked by the mainstream and alternative music worlds. Even Americana and roots enthusiasts have only scratched surface of the multitude of musicians, past and present, who continue to inspire the Hot Club of Cowtown.

“This music may be more prevalent now than fifteen years ago,” says James. “I don’t think as much of this was going on when we first got together–the seamless blending of Western swing tunes and hot jazz standards a la Django Reinhardt and Stephane Grapelli.” While the merging of gypsy jazz with Western swing sounds natural when listening to Hot Club of Cowtown, in the beginning the fusion of the two styles seemed more unorthodox than it does now. “We just have always listened to old recordings and get inspired by that endless trove of astonishing performances. Mixing these genres together has always just been such a natural fit. Over the years other ‘hot club’ bands come and go but I guess generally we may be the most visible touring Western swing power trio out there.”

The band has a long list of accomplishments since their first album, Swingin’ Stampede, first appeared in 1998 on HighTone records. Most notably, they are marking their 20th anniversary during the 2017-2018 touring season. They have released nine studio albums and they are among the youngest members ever to have been inducted inot the Texas Western Swing Hall of Fame. A considerable accomplishment for a band that have migrated their way from New England and the Midwest by way of New York City. They have most recently been named Western Swing Group of the year in 2015 at the Ameripolitan Music Awards (a new genre created by Dale Watson to recognize roots-influenced bands). In 2015 James won for Western Swing Female as well. The band has also represented the U.S. State Department as Musical Ambassadors over the past several years to places as diverse as Azerbaijan, Algeria, Armenia, the Republic of Georgia, and the Sultanate of Oman. Their festival appearances have been as diverse as they’ve been numerous including jazz, bluegrass and country festivals throughout the UK, Europe, Japan, Australia and North America.

In 2004 the Hot Club of Cowtown gained a special fan in Bob Dylan when they were invited to open a month-long tour of minor leaue ballparks with Dylan and Willie Nelson. James sat in with Dylan’s band often on that tour and the following year James was hired to play briefly in Dylan’s touring band — the first dedicated female instrumentalist to join his road band since Scarlet Rivera some 30 years before.

Hot Club has maintained an on-again, off-again relationship over the years, which appears to be more about career choices than personal differences. When asked about the brief times the band has not been touring or recording, James says, “It’s like Brokeback Mountain — ‘I just can’t quit you!’” she laughs. “Some bands are maybe more studio bands, or other bands are really more about songwriting. We came together as instrumentalists who love to jam and play, and we really are at our very best as a live band. To me it’s as almost as though the instruments have gathered us together to sing and play their music. Like the songs conjure us and we gather together and deliver them.”

Indeed, when seeing the trio perform, hearing them on studio or live records, there is a sense of something beyond them individually–and beyond their years–taking over through this music that has lasted through the years. “At the end of the day, it’s fun to get up on stage when you’re with your A game,” James says. “If you don’t have a great show, great people up on stage together who you believe in, it’s hard to get up on stage. To do this thing we are truly thrilled by, as a band together, this is what makes us go. That there is a demand for us, for this little Western swing trio, to continue to tour, play, record, travel, it truly is a great gift. We’ve been together a long time and continue to share something unique and mysterious that continues to develop. As the saying goes, the harder you work, the luckier you get. For me it’s like this magical tree that we nurture and feed and in return it gives us shade, fruit and joy over the years.”

“The interplay is as sleek as ever.” – The Times (London)

“Hot Club of Cowtown swung light and tight, like tumbleweeds made of velvet.” – Rochester City Paper

“As instrumentally and vocally tight as any band out there working in any genre today….three skilled musicians who can seemingly just tune up and play, something that’s becoming increasingly rare these days.” – American Songwriter