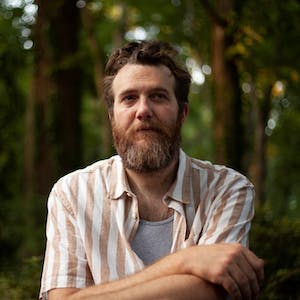 JOHN MARK MCMILLAN is something of an anomaly: an artist and Platinum-selling songwriter bending genres and defying categorization by carving out his own unique and independent path. With an ear for melody and a poet’s eye for metaphor, no topic has been off-limits. While each of his albums over the past decade have continued to explore new territory, it’s McMillan’s ability to give lyric and language to the human experience that many consider his greatest gift.

The Gray Havens centers around husband/wife Dave and Licia Radford. Since their beginning in 2013, their projects have been hailed as “an imaginative treatment of faith…[having] a visionary quality that’s both playful and enraptured.” They have a knack for creating a listening experience similar to paging through your favorite book, with richly textured compositions and multi-layered lyrics. Releasing their debut EP on NoiseTrade in 2013, and their first full-length album, Fire and Stone, in 2015, the duo has gained a steady following of listeners nationwide.

Their newest release, Ghost of a King, debuted at #3 on the iTunes singer-songwriter charts, rewarding listeners with immersive soundscapes and lyrical imagination. From poetic – almost Shakespearean – imagery to grand epics fit for darkened concert halls, to pop music infused with loops and infectious beats, the album possesses a remarkable range. In the context of that refreshing variety, the album stays cohesive thanks to its exploration of the human condition of longing.

Today, The Gray Havens are making the most well-crafted music of their career. Their next highly anticipated full-length album is expected to release in 2018.

Three chords and the truth.

That was Harlon Howard, the King of Music Row, deftly prescribing the formula of the perfect country song. It’s been a catch-cry for the folk musician ever since.

Before then, it was the psalmist’s motto. The Bible poets wrung it from every note. It was hallowed as the great expositor, the songwriter’s muse - wisdom’s bride, calling faint from heaven’s faraway home.

And it’s still the songwriter’s holy grail today. From the bluesman to the politico-punk poet, to the strung out folk prophet, truth is always the muse and the horizon. The volatile partner at the end of each verse.

Growing up on strains of Dylan and the rich mine of the old Christian folk troubadours, Strahan seemed always destined to seek the truth. His songs speak of that moment where “poetry kissed reality”, his modern Psalms wrestle with that same world that David did, the world that struggles to reconcile the face of heaven in this constant economic, political and spiritual upheaval.

His first foray into folk theology, 2011’s Water & Fire provided a refreshing salve of imagery and language. A free gift downloaded by fans in over 22 countries, the E.P’s track “Heaven” settled in the top charts of Christian radio in New Zealand and garnered radio play in Australia. He then embarked on an intimate nationwide living room tour in 2012, a pilgrimage which armed him with journals of stories and prayers. When it came to his debut full-length Strahan knew his new album Posters had to delve deeper.

And it does. Like the old psalmist, he reaches to nature to find the face of the divine, wrestling with truth as insistently as the tide claiming the shore. Like the old folk man, he stares through a dim glass and sees a broken world caught in that age old tension. Hallelujahs. Laments. Death. Life. All is beauty.

And that old familiar catch-cry. Chords and truth. These old worn songs that carry hints of the divine.