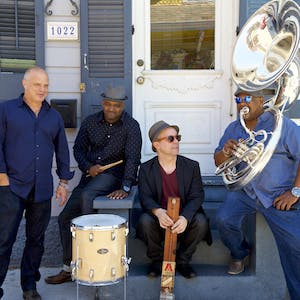 Mad Skillet was born of a late night show in New Orleans, LA during Jazz Fest 2015. It came out kicking and screaming, laughing and wailing, laying down a deep New Orleans groove steeped in jazz, blues, psychedelic rock, and R&B.

Medeski and Bernard's yearly quest to play together during Jazz Fest found a special chemistry with the addition of Joseph and Higgins. The eclectic, far-reaching backgrounds of Medeski and Bernard alongside this legendary NOLA rhythm section generated what Medeski calls,"a vast musical universe with limitless potential."

"Terence and Kirk are a great rhythm section. Classic. They're overflowing with tradition, yet always ready to go any direction the music calls for. It's rare to find musicians with such deep roots who are also open to experimentation. I've always wanted an excuse to play with them, so when Will mentioned using Kirk on the gig, I thought it was the perfect time to bring Terence in too. And Will Bernard... well, something happens to Will when he's in The Crescent City. It's like superman coming out of the phone booth! "says Medeski.

John Medeski is best known for his buoyant, organ-centric approach to jazz as a part of trailblazing trio Medeski Martin & Wood, he also collaborates often with John Zorn and John Scofield and plays in lauded super-groups The Word, Spectrum Road, and Phil & Friends and in 2013 he released a introspective solo piano album on OKeh/Sony Records called, A Different Time.

Menastree- was born in the early summer of 2014, originating from Charlotte North Carolina.

Beginning with musician/producer and videographer DJ Lil Tone, Musician/producer Jesse Lemar Williams and musician/vocalist Jeremy Mayher. Menastree created their formula for their sound by backing various artist deriving from various genres and performing at festivals such as SXSW. As a result of the new age mashup sound with elements of hip-hop/trap/jazz/house and R&B.

By January 2017 Menastree had officially been established.

Solidifying the establishment with the particularly chosen additions of Zach Wheeler , Braxton Bateman , Malcolm Charles, Waneisha “Nish” Massey , Curt Keyz , Stefan Kallander , and Marcus Jones. Jesse Lamar Williams then planted Menastree in the heart of Charlotte North Carolina’s “art district Noda at the corner of E. 36th St. and N. Davidson Ave. at the prestigious listening room “The Evening Muse” where they can often be found cultivating the culture in a monthly residency.