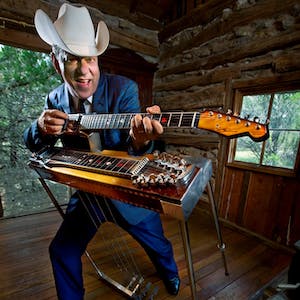 Born in 1952 in Cottonwood, Arizona, Junior Brown showed an affinity for music at an early age. Discovering a guitar in his grandparent's attic at age seven, he spent the next several years woodshedding with records and the radio. Junior was also able to tap into music he couldn't hear at home which older, college aged kids were listening to. This was possible as a result of his father's employment at a nearby campus in 1958. Armed with this broad spectrum of source material, he had developed some formidable chops by the end of his teen years.

Brown's passion for Country and Western music had intensified by the late 1960's. With many prominent figures as his inspiration, he spent his nights further sharpening his musical skills in small clubs across the southwest. "I played more nights in honkytonks during the 70's and 80's than most musicians will see in a lifetimeI did so many years of that, night after night, four sets a night, 15 minute breaks; I mean after that, you gotta get good or get out." Brown still prefers to refer to his favorite music as "Country and Western" as it was called when he began his career. More recently, however, with the exception of Classical, Modern Jazz and Rap, he has shown himself to be equally adept at virtually all styles of American music, leading many to dub him America's most versatile musician. A listen to his catalog of recordings reveals a virtuosity in Country, Western Swing, Hawaiian, Rock and Roll, (Hard Rock, Surf, etc.), Blues, Trad. Jazz, (Swing), Pop, Bluegrass, and even Mariachi.

Junior knew he could play and sing almost anything, but he had yet to explore his potential as a songwriter. "I realized no one was going to walk into a club and discover meso I started hanging out with some songwriters who I'd played some gigs with, and they showed me how to support myself by writing and publishing." With his songwriting coming together by the mid 80's, Brown upgraded his gear in a way that no artist had ever done. Struggling through each show with the back and forth switch between the six string guitar and its steel counterpart, he had a dream one night about the two instruments mysteriously melting into one. The result was Brown's unique invention, the "Guit-Steel", a double-necked guitar combining standard guitar with steel guitar, allowing him to switch instruments quickly in mid-song while singing. There are other Guit-Steel players now, but Junior was the first, and for many years the one and only. For this and other reasons, he is truly an American original.

In the early 90's Brown and his band (including wife, Tanya Rae) relocated to the fertile Austin, Texas music scene and landed a weekly gig at the Continental Club. His unique and entertaining combination of singing, songwriting, instrumental skills and producing led to a seven record deal with Curb Records that began with "Twelve Shades of Brown" in 1993. He later released two albums on the Telarc label.

Jim Garrett is a professional musician/singer/songwriter residing in Charlotte, NC. He has performed shows with national artist Billy Don Burns, Stevie Tombstone, J.B. Beverly, Owen Mays and Ray Lawrence, Jr. He has also done co-shows with Jim Avett and David Childers (Ramseur Records Artist). Jim has performed as opening act for national artists Radney Foster (twice), Shooter Jennings, Elizabeth Cook and Jr. Brown (twice). Jim is a well known and sort out in the music circles for his Tele guitar work. He currently fronts his own band JG and the Dirty Water Dogs (all acoustic) and plays lead guitar for several band including Jason Moss and Hosses and David Childers. Jim’s music is a blend of all different styles to include sixties, seventies, country, bluegrass and blues. He crosses many genres and has wide appeal to all generations and audiences.

“There is a lot of great talent that comes out of North Carolina. I have worked many times with Jim Garrett and he is certainly one of the best musicians, singers and all around good guy's from that great state. If any of you are fortunate enough to get to work with Jim and you bring a Telecaster you better know how to play it or be very embarrassed, cause Jim Garrett can smoke one, love you brother, BDB”