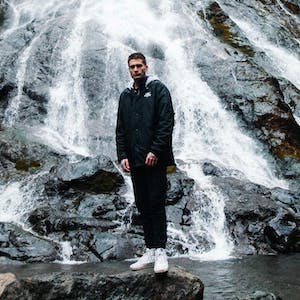 At 23 Years Old Justin Stone has acquired over 70 million Spotify streams independently from Columbus, Ohio. With his confident persona & authentic lyricism Stone has been turning heads and building a cult like fan base.

23 year old alternative hip-hop artist bringing together a melting pot genre mixed with pop, punk, emo and rap. He is known for his most recent album, Look What You Started, which reached #10 on the iTunes Hip-Hop charts. Other notable albums include Long Time Coming, Beauty in the Struggle, and I’ve Been Here Before. In addition to these albums, Justin has released a plethora of EPs and singles. Justin was on the Missing Pieces Tour with Hi-Rez and Emilio Rojas. He also was on Ryan Caraveo’s 2018 Spring Tour.

Ryan Oakes is a 24 year old artist from Northern, VA. Pulling in nearly 100,000,000 hits independently and quickly rising theres no saying just how far his talents may take him. He emphasizes a very real style telling true stories by rapping over pop punk trap type beats that really hit home with people. He is currently residing in Los Angeles

South Carolina native Chris Buxton is a singer, rapper, and songwriter of alternative hip-hop with pop and indie undertones. He views Childish Gambino and Kid Cudi as some of his primary influences, but he also finds a way to mesh the sounds together while adding an extra “pop” feel to his records. Led by his first release “Remember” which accounts for over 3 million plays across streaming platforms, he quickly followed the song with a number of releases in 2016. Ultimately, this pushed him to release a mixtape titled “Condo 8” which had songs such as “Time” and “In Too Deep”. In 2017, Chris released his first studio project titled “Suburban Popstar” while being a member of Skizzy Mars’ collective Penthouse Music. The project contained songs like the introspective “Mary, Lucy, I” and the summertime ready “Swerve”. After the project, Buxton went on to take a personal break from music to develop his craft. Between 2017-2018, Chris took a more songwriter approach by writing for Ted Park on his song “Next to U” off his new album “They Don’t Know”. He was also a feature on Scott Helman’s “Ripple Effect [91goat Remix]”. At the end of 2018, Chris released his project titled“Nostalgia” which was carried by its self titled single “Nostalgia”. Months later, Chris teamed up with North Caroline producer Te’Jani, and they are said to have a lot of singles on the way in the last quarter of 2019. The first single is coming out this July and it’s titled “Best Friend”.

MoonLander is a 22 year old artist from Concord, NC. At the age of 14, he began his music career. Over the past few years, MoonLander has grown his fanbase organically through his harmonies and catchy songs and his songs have now been streamed over 500,000 times. MoonLander just got off his second tour with Kid Quill previously opening for Mike Stud and he has opened for artists such as Wiz Khalifa, Juice WRLD and Machine Gun Kelly during Charlottes own Breakaway Music Festival. MoonLander hopes you strap on for the ride!