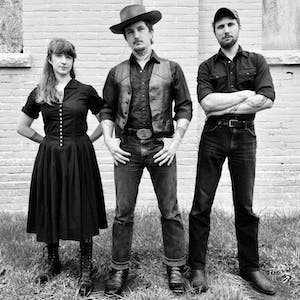 “I wanted to dig under the darkest impulses of humanity for this album which are violence, selfishness, and destruction,” says Benjamin Tod, guitarist, vocalist, and primary songwriter of Americana trio Lost Dog Street Band. The Muhlenberg County, Kentucky-based group’s latest album, its fifth overall, Weight Of A Trigger, out March 29th, is a potent distillation of its outlaw heartache soul.

The dark impulses Ben sings about are simply the demons that have driven him since he was a teen. At 16, Ben left home to play music on the streets. Since then, he’s lived under bridges, slept in jail cells, sought freedom hopping freight trains, battled addiction, and watched many good friends die from the same rambling disease. Some states, he remains a wanted man with active warrants. Though Ben has been aimless, and destructive, he’s always been prolific through exorcising his demons in song. Even if that meant writing songs at 7:00 AM in dank and dark basements strung out on drugs and drunk.

His companion in life and music, Ashley Mae, is an accomplished fiddle player and harmony singer. The pair met in the Nashville punk scene when Ben was 15, and Ashley was 17. They share in a tumultuous love affair that’s defied adventures, and misadventures. The couple formed Lost Dog Street Band in the winter of 2010. The duo’s vision was to carry on the tradition of the American troubadour with fine Americana songcraft and starkly real storytelling. Today, Ben and Ashley Mae are joined by bassist Jeff Loops of the beloved roots band, Deep Chatham.

The three-piece group’s latest, Weight Of A Trigger, is a portal into when Americana was peopled by sensitive outlaws who pleaded for salvation in song. The 10-song collection spans old-time music, Appalachian folk, redemptive country blues, and winsome balladry. Each song is elegantly essential, using teardrop pedal steel guitar, delicate fingerpicked passages, emotive harmony vocals, and stately violin touches as delicate dynamic touches. It’s an album of hard truths themed around a three-part narrative of Thomas Clancy Russell, and stories of fated love, addiction, tragic deaths, and rising demons. The poetic former collaborator Nicholas Ridout, a uniquely gifted musician who left before his time is always honored on their albums. His presence is made all the more poignant by Lost Street Dog performing his sweetly high lonesome song “Lazy Moonshiner.”

Casper Allen is a singer-songwriter from Texas and currently based in New Orleans.

The Resonant Rogues craft fresh songs from a variety of vintage folk styles, featuring vocal harmonies accompanied by accordion, guitar, banjo, fiddle, and upright bass. With a passion for folk music that spans continents and oceans, the band is led by partners Sparrow and Keith J. Smith. The pair met in Asheville in the Autumn of 2012, and their instant spark lit a blaze that could not be contained. Since then, they have dedicated their lives to crafting and sharing their music, touring extensively around the world. The Rogues weave the threads of European, Middle Eastern, and American folk music together into a beautiful tapestry that simultaneously showcases tradition and innovation.

The Rogues have spent the last 6 years traveling from their mountain home in Western North Carolina all the way to Turkey, Australia, around Europe, and all around the US, sharing their music and learning traditional styles along the way. Self managed, tenacious, and fiercely independent, these adventurous travelers make it a priority to seek out epic nature and intimate, spontaneous cultural experiences on their tours.

In addition to bringing the Rogues on the road, Sparrow and Keith are full time musicians in Asheville, leading a swing band (Sparrow and her Wingmen) and a Balkan band (Black Sea Beat Society) as well as teaching swing dance lessons, keeping a garden, and, most importantly, raising an 11 year old son. The pair pull from some of the best musicians in their chosen genres for touring, playing often with Kristin Harris, Daisy Castro, and Cailen Campbell on fiddle, and Eric Heveron-Smith and Daniel Iannucci on upright bass.

The Rogues’ third studio album, Autumn of the World, was released in May, 2019.