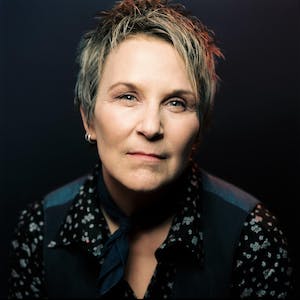 Every single day, which means some days are better and some much worse.

Every day, on average, twenty-two veterans commit suicide. Each year seventy-four hundred current and former members of the United States Armed Services take their own lives.

That number does not include drug overdoses or car wrecks or any of the more inventive ways somebody might less obviously choose to die.

It seems trivial to suggest those lives might be saved — healed, even — by a song. By the process of writing a song.

And yet there is nothing trivial about Mary Gauthier’s tenth album, Rifles and Rosary Beads (Thirty Tigers), all eleven songs co-written with and for wounded veterans. Eleven of the nearly four hundred songs that highly accomplished songwriters have co-written as part of Darden Smith’s five-year-old SongwritingWith:Soldiers program.

None of the soldiers who have participated in the program have taken their own lives, and there’s nothing trivial about that. Something about writing that song — telling that story — is healing. What Smith calls post-traumatic-growth.

Gauthier’s first nine albums presented extraordinary confessional songs, deeply personal, profoundly emotional pieces ranging from “I Drink,” a blunt accounting of addiction, to “March 11, 1962,” the day she was born — and relinquished to an orphanage — to “Worthy,” in which the singer finally understands she is deserving of love. Maybe that’s where the confessional song cycle ends, for she has midwifed these eleven new songs in careful collaboration with other souls whose struggle is urgent, immediate, and palpable. And none are about her.

Each song on Rifles and Rosary Beads is a gut punch: deceptively simple and emotionally complex. From the opening “Soldiering On” (“What saves you in the battle/Can kill you at home”) to “Bullet Holes in the Sky” (“They thank me for my service/And wave their little flags/They genuflect on Sundays/And yes, they’d send us back”), to the abject horror of “Iraq,” and its quiet depiction of a female mechanic’s rape, each song tells the story of a deeply wounded veteran.

Darrell Scott, returning from one of Smith’s first retreats, called and told Mary she needed to participate. “I felt unqualified,” she says. “I didn’t know anything about the military, I was terrified of fucking it up. I didn’t feel I knew how to be in the presence of that much trauma without being afraid. But Darrell knew I could do it. Turns out, I was able to sit with the veterans with a sense of calmness and help them articulate their suffering without fear. I was shocked by that. And I took to it.”

It has become a calling. “My job as a songwriter is to find that thing a soul needs to say,” Mary says. “Each retreat brings together a dozen or so soldiers and four songwriters, three songs each in two days. We don’t have a choice. We have to stay focused, listen carefully, and make sure every veteran gets their own song. And we always do.”

“None of the veterans are artists. They don’t write songs, they don’t know that songs can be used to move trauma. Their understanding of song doesn’t include that. For me it’s been the whole damn deal. Songwriting saved me. It’s what I think the best songs do, help articulate the ineffable, make the invisible visible, creating resonance, so that people, (including the songwriter) don’t feel alone.”

The impact of these songs becomes visible quickly, unexpectedly.

Featured in the TV series “Nashville,” the Bluebird Cafe now prospers as a tourist destination. The room fills twice a night with people thrilled to be in the presence of real live Nashville songwriters.

Who, in turn, are thrilled to be in the presence of a paying audience that can do nothing to advance their careers, save give a genuine response to their songs.

The gentleman at the next table has handsome white hair and a hundred-dollar casual shirt, and almost certainly had no idea who Mary Gauthier was, nor what her songs might be about, when he came out of the sunlight into the darkened listening room. He knows, now. Thick, manicured fingers cover his face, trying to catch his slow tears. His wife sits close, watches carefully, but knows better than to touch him.

He is not alone in that small audience.

Every day we are touched by the veterans in our lives, whether we know it or not.

Every single day. Even if it’s only the guy on Main Street, in the wheelchair, with the flag.

And, yes, a song may be the answer.

“Because the results are so dramatic, this could work for other traumas,” Mary says. “Trauma is the epidemic. You say opioid, I say trauma epidemic. As an addict, I know addiction is self-medication because of suffering, and beneath that pain is always trauma. Underneath so much of the problems in the world is trauma, it’s the central issue humanity is dealing with. We’ve found something powerful here, that brings hope to people who are hurting. So they know they are not alone.”

Jaimee Harris is poised to become the next queen of Americana-Folk, a slightly edgier Emmylou Harris for the younger generation.

Her new album draws comparisons to Patty Griffin, Lucinda Williams, and Kathleen Edwards – all writers who know how to craft a heartbreakingly beautiful song with just enough grit to keep you enthralled. Harris writes about the basic human experience, in a way that is simple, poetic, and often painfully relatable.

Harris isn’t afraid to get personal, but her vulnerability never veers into the self-indulgent. Each little confessional gem she puts out there is something the listener will connect to; these are things we’ve all felt, though many of us are less than likely to admit them.

“In a depressive state… how long will I feel this way?”

Harris's songs have a depth to them, and her lyrics betray a wisdom beyond her years. “I write as a way of dealing with things," she says. "There’s also a lot of acknowledging my own faults. These songs feel pretty vulnerable… to the point where I wonder if people are going to ask me ‘Are you okay?’ But I really just hope they see a little bit of themselves in the songs and find something they can connect to.”

Jaimee grew up in Waco, TX, a child to young parents, high school sweethearts. When she was five years old, her father noticed that she had taken an interest in music, and got her a guitar for Christmas. Soon after, she discovered Emmylou Harris and Fleetwood Mac, and before long, the kid was hooked. Harris’s father took her down to Austin for the first ever Austin City Limits Festival, and there she saw Emmylou, Buddy & Julie Miller, and Patty Griffin all perform live. Her father had only brought enough extra money to pay for a hotel in Austin that evening, but when he saw how much Jaimee wanted those CDs in the merch tent, he ponied up the cash and drove all the way back to Waco late that night.

Harris grew up, as kids do, and moved to Austin in 2009. She intended to throw herself into the local music scene, playing shows and singing songs late into the night at friend’s houses, but she fell into a hard-partying crowd, and soon enough, things started to fall apart.

“After I got arrested for the second time, I knew I needed to get sober,” says Harris. “By that point, I knew I was really on my own… everyone close to me had stopped enabling me. I knew I had to get myself together in order to stand on my own feet.”

Once she was able to clean up her act, Harris says, everything just seemed easier. That’s when she began writing the songs that would make up her debut record, including “Snow White Knuckles” which chronicles her path to sobriety. It’s also when she started meeting the musicians who would soon join her live band, and the artists, including people like BettySoo and Jimmy LaFave, who would be become her creative mentors.

“I am especially impressed with some of the new songwriters that have hit town in the last few years, like my new favorite Jaimee Harris,” commented LaFave. And he’s not the only one who was impressed. Peter Blackstock of the Austin-American Statesman has called Harris “one of Austin’s most promising young singer-songwriters.” And all this before she even released her first record.

Harris’s talent is undeniable. But what sets her apart more than anything is her admittedly “obsessive” love of music. “Jaimee is, deep down, a true music fan; she is passionate about consuming as much great music as she can,” says BettySoo. “Jaimee is known among our circle of friends for attending more shows than seems humanly possible, and she's not doing it out of FOMO or to be 'seen on the scene.' She goes because she's a fan.”

“Music is my whole life,” says Harris, “If I’m not writing or playing, I’m going to see a band, or reading a book about Woody Guthrie. I live in a city where I can walk in and see an amazing show like James McMurtry practically for free, every week. I only made it through one semester of college, but being around these amazing songwriters here in Austin… It’s like getting an education.”