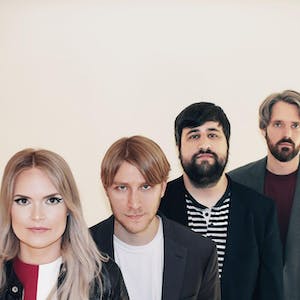 Modern Moxie is an indie pop/rock band based in Charlotte, NC. Hailing from a small South Carolina town, multi-instrumentalist Madison Lucas took up songwriting in college, mostly confined to her dorm room closet. By 2011, she found herself with enough songs to make an album, and wanting to move forward with her musical endeavors, teamed up with producer Kenny McWilliams (Archer Avenue Studio) and Dave Harris (Studio B Mastering) to release her first effort entitled the bedroom ep.

With a well-produced physical copy of her greatest embarrassments and triumphs proudly in tow, Lucas and her acoustic guitar began driving hours out of town to perform at open mics, slowly learning to shake off the terror of being so uniquely vulnerable in front of complete strangers. She found a world of support and an unexpected opportunity to create among like-minded musicians which prompted a move to Charlotte, NC. By 2013, Lucas had found a partner in crime, bassist Harry Kollm (Time Sawyer, Asleep in the Weeds, Jon Linker Band), who’s varied veteran experience propelled Lucas to get serious about forming a full band, thus bringing Modern Moxie into existence.

Lucas and Kollm spent the next four years going through a series of line-up changes, working together to capture Lucas’ essential drive to get the melodies she heard inside herself out into the open. The duo spent this time kinetically writing, correcting, and transforming dozens of original songs, performing now and again, but mostly keeping Modern Moxie as a side project. After marrying in late 2017, Lucas and Kollm spent their first year as husband and wife recording sporadically with the bedroom ep producer, Kenny McWilliams, to create an LP together, a labor of love called Claw Your Way Out.

Late-night at a 4th of July party among fellow musician friends, Lucas eagerly shared a newly recorded song, “Light + Sound”. Guitarist Phil Pucci (Pullover, Serfs, Landless, Ernie) was instantly smitten by Modern Moxie’s knack for song structure which had their signature effervescent pop melodies floating over the distorted fuzz of angst-ridden guitar. Pucci (who coincidentally officiated the couple’s marriage) joined Modern Moxie shortly after hearing the track and brought along original Serfs drummer Charlie Weeks to complete the current and solidified line up. Years in the making, Claw Your Way Out is a celebration record, triumphantly bursting with hilarious and moving self-reflection.