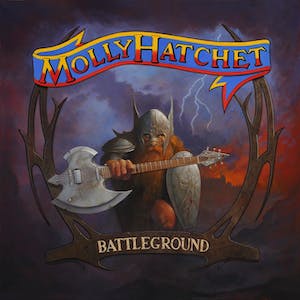 It’s no secret that a lot of fans measure the artistic value of a rock band mainly by the quality of a group’s live performance. The Allman Brothers without their legendary concerts? Unthinkable! Lynyrd Skynyrd as just another anaemic studio project? Impossible to imagine! The same goes for Molly Hatchet as another legendary force among these protagonists of the longstanding history of Southern rock that, alongside lots of outstanding studio recordings, the band’s full potential comes into effect live on stage. Again and again, the musicians surrounding guitarist Bobby Ingram have reinforced their reputation as an awesome live act in brilliant live “battles”, so it comes as no surprise that requests by their international fan base for a new live recording have been growing increasingly insistent for a number of years. Now it’s ready to be unleashed at last: Battleground, a live offering consisting of a total of 19 songs, will be available on Steamhammer/SPV from 29 November 2019 as 2-CD Digipak, triple LP in a gatefold cover, and for digital download.

The fact that Molly Hatchet are scheduled to embark on a major tour of Germany and Switzerland almost simultaneously with the release of Battleground increases their fans’ anticipation of the new recording, which the band members consider to be a first-rate document of their creative power. Ingram refers to it as “the rewards of seeing and meeting generations of fans, hearing their life stories, listening to them speak of when they first heard a Molly Hatchet song on the radio.”

The upcoming shows will see Ingram & Co. not only present their greatest hits, they will also introduce their new vocalist Jimmy Elkins, who has joined the fold to replace the late Phil McCormack, who sadly passed away in April 2019. Elkins was the frontman of Florida band Bounty Hunter for a number of years, an act who has shared a stage with Molly Hatchet on various occasions over the past two decades. “To us it was the logical next step to ask Jimmy to become our new vocalist,” Ingram explains. “You can tell that he has the Southern rock gene and is a perfect match for Molly Hatchet, not only on a musical but also on a personal level.”

With Elkins at the centre of their high-decibel Southern rock music, Ingram and his longstanding band mates, keyboardist John Galvin, bassist Tim Lindsey and drummer Shawn Beamer, continue to be a powerful musical force. Which is one of the reasons why the Molly Hatchet classics – from the opening track ‘Bounty Hunter’, the hard-drinking ‘Whiskey Man’, the programmatic anthem ‘Son Of The South’ and fan faves such as ‘Edge Of Sundown’ and ‘Fall Of The Peacemakers’ right up to the breath-taking finale, ‘Flirtin‘ With Disaster’ – really get down to business from the very first chords. Ingram: “In recording this album, we compiled a four-decade long catalogue of the songs that our friends wanted to hear. They would tell us what songs they wanted on the album, and we recorded them. Some of these songs have never been recorded on a live stage before, and we were honoured and proud to be able to perform them for many generations of past, present, and future Southern rock fans.”

Battleground was recorded in Pratteln, Switzerland, in Ludwigsburg, Germany, and during Molly Hatchet’s 40th anniversary tour of the United States and features amazing cover artwork created by Paul Raymond Gregory (Saxon, Motörhead, Uriah Heep, among others). Ingram looks back with legitimate pride and unmistakable modesty not only at the new live album but also at the band’s career to date: “Molly Hatchet has now been in the mainstream of Southern rock for over forty years and still counting. That in and of itself is an honour for every band member who experienced the journey along the way.” It’s this honour that listeners sense in every note on Battleground.

Michael Tracy combines straightforward American Rock and Roll with poignant lyrical themes, reminiscent of Rock Singer/Songwriter idols like Tom Petty, Bob Seger, John Mellencamp, and Bruce Springsteen. He has released four studio albums, and has shared the stage with Bon Jovi twice, Poison, George Thorogood, Styx, Foreigner, Don Felder, Foghat, Marshall Tucker Band, Jefferson Starship, Dokken, and the latest in 2019 acoustic sets for Bret Michaels & America. Michael released his latest album Still Got Soul (2017), recorded in Los Angeles with producer/co-writer Sahaj Ticotin. Michael's latest effort is his most ambitious yet, representing an artist who has clearly found his voice and a "lane" to call his own.

It was early 2011 when Michael Tracy began his journey as a singer/songwriter, stepping on stage at a local open mic in Charlotte, NC, to nervously perform some songs he had just written. He had spent his early 20’s in the Navy, stationed on both coasts and traveling to countries throughout the Mediterranean during his time in the military. He married his wife while in the Navy and they have two children together. It was later that Michael joined together his love of words and music as a songwriter, having learned guitar as a child fascinated with books and writing. The open mic performance awakened something in Michael Tracy and he continued honing his chops that first year, jumping on stages all over Charlotte and jamming with local musicians. He went into the studio and recorded his first album, Enough Small Talk, which he released in November 2011.

Over the next two years, Michael put a band together and impressed audiences with his high-energy and soulful performances. By 2013 he won his first of many local and regional awards with the reader’s choice award for Best Songwriter from Creative Loafing Best of Charlotte. He also won the Charlotte Music Awards 2013, and performed his first major opening gig when he was offered the supporting slot for George Thorogood at The Fillmore in Charlotte.

Michael Tracy booked even more high profile supporting gigs in 2014, including opening slots for Styx, Foreigner, Don Felder, Jefferson Starship, Dokken, and Zach Myers (Shinedown), and he ended the year ended with his own headline show at The Fillmore promoted by Live Nation. While spending 2014 performing across the region, Michael also returned to the studio and produced his next album Gonna Smile, which was signed by the indie label Spectra Records and released in February 2015.

Despite an eventual falling out with that label and a restructuring of his band, Michael pushed forward and set out to find the right producer that could capture the sound and style he had spent years cultivating, but had yet to realize on a record. In late 2015 Michael would find what he was looking for with Los Angeles producers Bob Marlette (Lynyrd Skynyrd, Alice Cooper) and Sahaj Ticotin (Ra). He traveled to LA and recorded three songs with them that would find themselves on his early-2016 release Love And Worries, a short collection of previously unreleased material that also included a couple of songs recorded in Atlanta, GA with producer Joey Huffman (Hank Jr.) and featuring guitar slinger Rick Richards (Georgia Satellites).

From those original Los Angeles sessions, a bond emerged between Michael and producer Sahaj Ticotin, and a shared belief that together they could create great records. Michael and Sahaj got together in late 2016, co-writing an original Holiday tune that Michael had been working on called “Poinsettia Red.” Immediately in 2017 they began plotting Michael’s next full-length album. His last label experience not being a perfect fit, Michael was inspired to go independent in support of his newest November 2017 release, Still Got Soul.

Though his time in the studio throughout 2017 kept his performances limited, Michael still booked some of his most notable shows to date. In February Michael and his band opened for Bon Jovi in Greenville, SC, garnering him a featured article in Billboard Magazine. In the early spring, he played two arena shows opening for Poison, and in September was on the PNC Pavilion stage in Charlotte opening for the Jeff Foxworthy/Larry The Cable Guy Back Yard BBQ featuring Marshall Tucker Band & Foghat. He also won the Queen City music award for Best Rock Artist. In 2018 Michael once again opened for Bon Jovi at Spectrum Center in Charlotte, NC and had a support slot with Jefferson Starship. In 2019 Michael had two more notable opening slots with America & Bret Michaels

Currently Michael is working playing consistently throughout the SE region and is preparing for a new album entitled, “Beautiful Things” to be released in March of 2020.