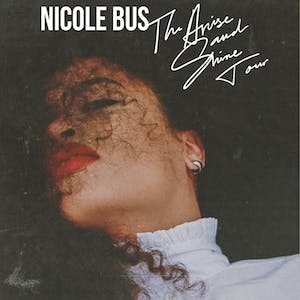 Some voices resound around the world.

They emanate the power to cross borders and break boundaries, uniting listeners everywhere to sing along. Charged up by gospel grandiosity, sun-kissed island grooves, and R&B soul, Nicole Bus wields such a voice. An empathetic writer, powerhouse vocalist, talented multi-instrumentalist, and impassioned performer, the Dutch-born multicultural songstress delivers a striking signature style on her 2018 debut for Roc Nation.

Most importantly, the girl has got something to say…“I’m half-Dutch and half-Curaçaose, so I get to see different sides of the conversation,” she says. “I’ve got an understanding of where people are coming from. In the current moment we’re living in, I think that’s so important. I just want to bring as many people together as possible.”

She most definitely can. Growing up in a small Holland village, Nicole vividly recalls listening to Sade, Bob Marley, and various gospel artists a la Ron Kenoly alongside her dad. On weekends, she sang in church before eventually picking up a keyboard at ten-years-old and cooking up countless rudimentary beats on 8MB floppy disks.

In high school, a mentrix who gave her theater and dance lessons introduced her to Lauryn Hill by way of the artist’s seminal MTV Unplugged performance, and it proved nothing short of life-changing. “It showed me how to put all of my emotion and passion into music,” she elaborates. While studying at the Conservatory of Amsterdam, she received opportunities to perform around the globe. The budding talent’s travels saw her engage crowds in Nicaragua, Israel, Palestine, Morocco, Indonesia, and throughout The Netherlands. In 2013, she participated in The Voice of Holland and emerged as a quarter-finalist as her profile dramatically grew. After winning another music competition, she met multiplatinum producer Needlz [Drake, Cardi B, Bruno Mars]. During 2018, Roc Nation heard a snippet of her music on Needlz Instagram and immediately reached out. Signed to the entertainment industry powerhouse, she dove headfirst into cooking up new music for 2018.

Nicole’s first single “You” hints at the scope of her robust range and the international implications of the sound. A reggae groove simmers beneath jazz-y horns as her jaw-dropping delivery takes the spotlight before slipping into a sample of the original instrumental behind Wu-Tang Clan’s classic “C.R.E.A.M.” It’s poetic, powerful, and provocative—and the perfect way to get to know the singer.“In the media, the profile of black males is pretty negative,” she sighs. “In the heavy times we’re going through right now, we don’t have an encouraging song about the beauty, strength, and intelligence of our black men. I decided to write one. I thought it would be cool to turn it around make a love story about this subject. The ‘C.R.E.A.M.’ sample felt so perfect. It’s a very beautiful dedication to boost character and morale and share love instead of all this negativity.”

With that spirit, her voice and message will resonate for a long time to come. “When you listen to me, I want you to walk away with the consciousness that you are loved and special,” she leaves off. “I would like to share my experience with others so they can get encouraged and relate to the story in the music. It would be great to see people all over the world dancing and enjoying the melodies. Whenever there’s a blue day I promise I can be the sunlight through your speakers.”

Tone Stith is a contemporary R&B artist whose career was boosted when he co-wrote Chris Brown's 2015 platinum single "Liquor." Soon enough, he joined Brown on the roster of major-label RCA ahead of his ballad-oriented debut album. The New Jersey native became involved with music at a very early age. He was familiar with playing drums before his teenage years, started learning how to use production software, and in church began to hone his singing talent, which came naturally as the son of a vocalist who had performed with Patti LaBelle. While in his teens, Stith was part of the group SJ3, who caught the attention of Jas Prince, the key figure behind Drake's ascent. Stith subsequently went solo with Prince in his corner.

RoyaltyThe first fruit of this association was Stith's co-writing of two songs, "Make Love" and "Liquor," for Chris Brown's Royalty. The latter song was released as the album's lead single in June 2014, reached number 60 on the Billboard Hot 100, and went platinum within five months. During the next two years, Stith was featured on songs by independent artists Von and PARRI$. His debut album, Can We Talk, arrived in 2017 via Prince's Young Empire Music Group (YEMG) and major-label RCA, with production from the duo PRBLMSLVRS. "Light Flex," a New Jack Swing throwback featuring 2 Chainz, appeared on the Uncle Drew soundtrack in 2018. Later that year, he issued the Good Company EP, which featured Swae Lee and Quavo on the title cut.