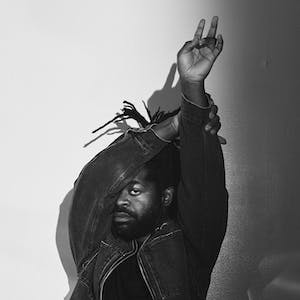 ROLLING STONE dubbed him “An Artist You Need To Know,” called him “a buzzing R&B star on the rise” and described him as “a singer-songwriter armored to compete in a world dominated by trap and EDM.” NPR MUSIC singled him out as “a fast-rising, pop-friendly R&B singer whose falsetto is no joke,” the NEW YORK TIMES spotlighted him on “The Playlist,” he was the face of SPOTIFY’s “Alt R&B” Playlist for 6 months, twice hit No. 1 on SIRIUS XM’s “The Heat” and was featured in a VEVO DSCVR campaign. BILLBOARD said his sound “is simply too grandeur to confine to one genre,” COMPLEX praised his “powerful ballads” and VIBE gave in to what they described as “the sort of woozy music that triggers free-falls into feelings” (they also wrote this: “the way he hoists his mid-range singing voice to the upper rungs of notes without notice, leveled and piercing, is a treasure”). DJ BOOTH described his EP, AFTERIMAGE (PRMD) as “Gallant meets Frank Ocean on ‘Nikes’” and said that he “redefines vulnerability.”

And then he backed it all up by going on “Jimmy Kimmel Live!” and delivering a killer performance.

This is an artist whose music has a sense of warmth and an undeniable soul that instantly connects with listeners. And as the stunning success of his hugely impactful lead single “Frustrated” portends, there’s much more to come. At the moment, “Frustrated” has racked up 20 million-plus Spotify streams and growing, with total streams exceeding 30 million thanks to additionally stellar tracks like “Be Honest” and “Show Me”).

We’re talking, of course, about Reggie Williams, but you can call him R.LUM.R.

Bradenton, Florida-bred and currently Nashville-based, the man has a background and set of skills like few others. He’s extremely well-grounded in old school R&B and jazz since birth, largely because he was only allowed to listen to the music his mother liked when growing up (think Sade, Anita Baker and George Benson). There was that one time when his sister tried playing Tupac in the house. That didn’t go over so well.

And despite the previous R&B mentions, don’t make the mistake of limiting him to just that genre because there’s much more to him: he’s a classically trained acoustic guitarist who grew up with the likes of Julian Bream and Christopher Parkening as potential role models. He was completely enamored with anime classics like Cowboy Bebop, Fullmetal Alchemist and Outlaw Star and studied Japanese as a second language at Florida State University. He and his school friends listened to Dark Side Of The Moon on repeat play as they slept, and he spent his youth listening to an eclectic mix of Prince, Debussy, the Sneaker Pimps, Ravel, Maxwell and Massive Attack, among many others.

“I'm a big fan of the song and of songwriting,” he says of his music. “Obviously it isn’t in the traditional sense of what people think of when they think of a singer-songwriter's music—but that’s where I started, and that’s the same process I go through writing songs.”

How would he best describe his music in terms of genre?

“If I had to label it, I’d say it’s ‘R&B/Singer-Songwriter/Soul/Electronic.’ But,” he smiles, “I don’t want to limit myself.”

His arrival was not sudden: With just an acoustic guitar, his voice, and growing number of original songs, young Reggie Williams put together some early recordings in Florida, began performing live and began to develop a following. As he tells it, those early days taught him some valuable eye-opening lessons.

“I think that honed my lyrical and songwriting process, and my process of listening to myself and what I think is real and important for me to write about.”

Over the course of the past couple of years, his approach to songwriting—and overall sound—began to evolve with the inclusion of electronics and with it came the transformation from Reggie to R.LUM.R and eventually, a move to Nashville.

About his EP, the Nashville-based R.LUM.R says, “I feel like it’s an exploration of all the things that R.LUM.R can be.” On it are low-tempo, piano driven tracks like “Learn,” the punchy and rebellious “Bleed Into The Water,” and “Love Less”—a unique track which Reggie calls “an investigation into how does one love another person? What if I pull away from this person? What if I love less?”

“I just wanted to get more things out there, get people listening, get people educated,” he says. “There’s versatility, there’s range and I feel like I have a lot of things to say. They’re not always going to be in the same format, and I want to challenge listeners to be open to that.”

“I went through some rough times,” he says. “But things have, thankfully, turned out ok. People like my songs, I can pay my rent, I don’t have to take shitty day jobs. I want to let people know that they can be more than their circumstances. You can overcome these things. I want to be an example of that.”