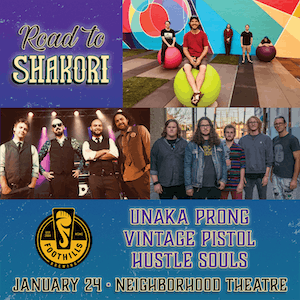 Over the past six years, Unaka Prong has been sculpting a sonically unique identity. Offering a fresh and memorable musical experience that many fans have described as a melding between prog rock groups like King Crimson, jazz funk groups like Soulive, and psychedelic jam rock groups like Phish. Combining odd meters, funky grooves, and earnest lyricism, their latest release, ‘Salinity Now!’, reflects the group honing in their songwriting with each stylistic direction. Recently the band has been busy touring the east coast performing at music festivals and clubs alike supporting notable acts including Tauk, Col. Bruce Hampton, Moon Taxi, Toubab Krewe, Jonathon Scales Fourchestra, and Dumpstaphunk.

The band takes an experimental approach to many of their songs through an expressive, conversational atmosphere between instruments. Every show and album mixes a hearty blend of genres that is sure to appeal to many different ears.

Vintage Pistol is a 5-piece roots rock band out of Fayetteville, Arkansas. Comprised of a heavy rhythm section, searing electric guitars, keyboards, and harmonica, they are described by most as wild, rambunctious and jam heavy. You’ll hear shades of the Allman Brothers, the Stones, Van Morrison and The Marcus King Band in their music.

They take the old road to rock and roll fame and fortune. Relentless touring. Hundreds of gigs, from city to city, night after night, fueled by drugs and booze and the relentless desire to be heard and to connect. No matter where or when you see them, you’ll never catch them on an off night. Vintage Pistol fires no rusty bullets. They explode like a flintrock spark to black powder and rage wildly and unpredictably throughout their shows.

Hustle Souls is an Asheville, NC based soul/rock band who fuse nostalgic, dust-covered-vinyl soul aesthetics with modern sensibilities; recently named one of “Music Connections” Hot 100 Live Unsigned Artists & Bands. Driven by a lust for songwriting, the band’s fervid live performance is heightened by undeniable instrumental prowess and 3 part vocal harmony. With relentless touring, sold out shows and major festival appearances the band has earned a reputation as one of the East Coast’s most promising acts,

After releasing a live video series, the band was approached by gold and platinum mixer and producer Eric “Mixerman” Sarafin (Ben Harper, Pharcyde etc.) about making a record. Hustle Souls released their debut full-length album “Color” to a sold out crowd and are currently touring from Atlanta to Boston in support of the 10 song LP.

“”Their blend of jazz, pop, and rock is inventive and captivating. Their lines are on point and their sound is tight, creating space for Billy Litz’s rabbit hole musicianship. And you can f***ing dance to it. Friday night was a revelation, I’m already looking forward to the next one.” – Caleb Calhoun