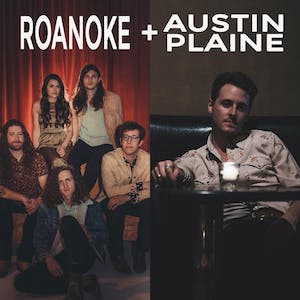 After five years spent rising through the ranks of Nashville’s thriving americana scene, Roanoke has grown from their folksy roots into a seasoned, road-tested rock outfit, retaining an affinity for storytelling and rich vocal harmony that has won over audiences time and again. Roanoke’s robust touring schedule has sharpened the skills with which this quintet crafts their songs, a sound at once timeless and youthful, seamlessly blending a 70’s aesthetic with modern sensibility.

No Depression describes Roanoke’s music as, “... ageless and expressive... so strikingly effusive it practically demands attention,” and Paste magazine ranked their EP ‘Where I Roam’ as one of the Top 10 EPs of 2018. Recent Roanoke highlights include a stint as Nashville independent radio station Lightning 100’s Artist of the Week, in addition to headlining the station’s weekly program Nashville Sunday Night, broadcast live from the stage at the venerable 3rd and Lindsley.

From MerleFest to SunFest, from New York’s Mercury Lounge to Nashville’s historic

Exit/In, Roanoke continues to thrill audiences with their captivating live show. Their latest release, “Live at The Amber Sound,” is streaming now, look to see Roanoke on a stage near you.

Like only the most insightful songwriters, Austin Plaine draws intense emotion from the subtlest moments. On his sophomore album Stratford, the Minnesota-bred, Nashville based musician shapes his lyrical storytelling with both precision and pure feeling, capturing every nuance of lost love and longing and fractured innocence. And while Stratford is steeped in a warm nostalgia, Plaine instills each song with a quiet optimism that speaks to bravely moving forward, even in troubled times.

Produced by Jay Foote and mixed by Steve Vealey (M. Ward, Phoenix, Hurray for the Riff Raff) at the legendary Electric Lady Studios, Stratford arrives as the follow-up to Plaine’s self-titled debut—a 2015 release that earned comparisons to Bob Dylan and Conor Oberst from Baeble Music. In a departure from that more stripped-down effort, Plaine assembled a full-fledged band who recorded in an apartment in Brooklyn, infusing Stratford with a homegrown feel and loose yet kinetic energy.

Taking its title from the Flatbush street where the album came to life, Stratford offers a classically arranged take on folk-rock that illuminates the intimacy of Plaine’s vocal work and the graceful candor of his lyrics. From track to track, the 27-year-old singer/guitarist reveals a refined sense of songcraft that he partly credits to moving to Nashville from his hometown of Minneapolis in early 2017. “Being part of a whole community of songwriters, you realize there’s a lot of different directions you can take a song,” he says. “It’s really opened me up as a writer, and it’s also helped me to hone in on every word of every line that I write.”

With its abundance of indelible images—night trains and the Northern Lights, backyard camping and drive-in romance—Stratford also bears a richness of detail that hints at the literary and cinematic influence behind Plaine’s songwriting. “People tend to think my songs are personal because I sing in the first person, but often it’s very observational for me,” says Plaine, who names Alexandre Dumas and Henry Miller among his inspirations. “I’m learning to understand new philosophies of life, love, and death”, attributing his passion for reading has helped him attain a better sense of his surroundings.

Proving the emotional depth of Plaine’s artistry, Stratford opens with the wistful reminiscence of “Something More” (a steel-guitar-laced track “like a movie I’ve seen before / way back when / we were something more” sings Plaine in the chorus), then slips into the bittersweet, burned-but-not-broken ache of “What Kind of Fool” (a rollicking, country-tinged number co-written with Sixpence None the Richer’s Leigh Nash and Stephen Wilson). Later, on “Lucky Ones”, Plaine presents a more hopeful portrait unconditional love, with singer/songwriter Soren Bryce lending her vocals to the chorus’s bright and beautiful harmonies.

While there’s no shortage of delicately rendered love songs on Stratford, Plaine also brings social commentary to tracks like “Rise Above It” (a soulfully understated anthem woven with intricate guitar lines, dreamy mellotron tones, and luminous organ melodies). And on “If Tomorrow Never Comes,” Stratford closes out with a powerful missive featuring the album’s most urgent vocal delivery (sample lyric: “I wake up every morning and I see the reddest sun/They’re shooting guns and sending bombs in a war that isn’t won/And through the lies I do disguise my heart inside my lungs/I live life today as if tomorrow never comes”). “That song is me showing my frustration with this modern world, and how we’re so consumed with social media that we tune out what’s happening right in front of us,” says Plaine. “We get so lost on the screens of our phones instead of seeing the world for what it is. I’m guilty. I love my iPhone”.

Born in Fargo and raised in Minnesota, Plaine had his first foray into making music upon finding an old guitar of his grandfather’s in a family closet. By high school he’d started writing songs, tapping into the timeless sensibilities that still inform in his music today. “My first influences were anything my dad was playing in the pickup truck when I’d go out on rides with him,” he says. “He’d play Bruce Springsteen and Van Morrison and Neil Young, and that’s what I dug into. Then highschool came and Bright Eyes changed my life.” During his junior year at the University of Minnesota, Plaine began dedicating himself more fully to songwriting and playing guitar. After posting several of his songs online, he headed down to Nashville to record a few tracks with Jordan Schmidt (a producer/songwriter/engineer known for his work with Florida Georgia Line and Motion City Soundtrack). A major creative turning point for Plaine, his time in Nashville led to the making of his debut album and release of “Never Come Back Again”—a breakthrough single that’s now amassed over 10 million streams on Spotify.

Although Plaine notes that gaining more life experience in recent years has shifted his songwriting perspective, his music maintains an unaffected quality that’s deeply refreshing. “I try really hard not to force songs” he says. “But I am always songbanking and hopefully one finds the finish line”. As a result of that instinct-driven approach, Stratford emerges as an emotionally raw album that’s cathartic for both listener and artist. “It will always be therapy for me,” Plaine points out. “If I get through a whole day without singing or playing guitar, the day just feels really strange. I don’t think that will ever change for me.”

HANNAH LUSK (of The Rally Club)

Hannah Lusk has always had a love for words, and her passion for songwriting has guided her into a rich musical life. She began playing live music with Forlorn Strangers in 2011. While in the Americana band, she toured the nation extensively and recorded dozens of songs. In 2018, she & her husband, Benjamin Lusk, formed Nashville based pop-rock group The Rally Club. Awaiting The Rally Club's full length debut release, Hannah is touring solo-- sharing some of her more intimate and absurd songs. While thematically ranging from heartbreak and existentialism to cook outs and Charles Manson, Hannah's music is nothing if not earnest. Combining her experience with stand up comedy, spoken word, and songwriting, Hannah and her guitar bring an engaging set hoping to make you laugh and cry at the same time.