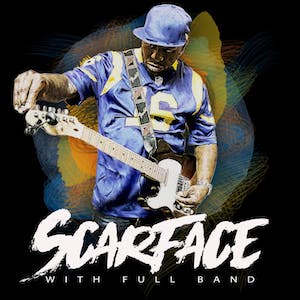 18+ Valid ID required for entry into venue (There is a $3 surcharge at the door for patrons under 21) - Accepted forms of ID: State Issued ID or Driver's License, Military ID, Passport

The saying goes, the more things change, the more they stay the same. In the music industry, the main talk these days is about how much has changed with the advent of new technologies and the image over everything attitude that dominates so much of what we see and hear. In hip-hop, rappers come and go like the wind. Sounds and styles hit the top of the charts and then disappear forever. The family tree has grown off in so many different directions that it’s sometimes hard to remember where it came from.

Thankfully we still have an artist like Houston’s own Scarface, a man who refuses to stray from what made him regarded as one of the best MC’s who ever did it. After a bit of a musical hiatus – a stint in prison, and a radical change in his health regimen briefly shifted his focus – Face is coming back hard this summer with his 13th album, Deeply Rooted.

From his earliest verses in the late 1980’s as a solo artist and a member of the Geto Boys to every song on Deeply Rooted, Face has always made sure to tell the stories he feels the world needs to hear. Whether it is speaking out against injustice, reflecting on his struggles with depression and his own mental health, or just telling the stories of the streets, he is one rapper you can always rely on to give you the real deal.

Scarface has seen it all, and has worked hard his entire life to keep the culture of hip-hop Deeply Rooted. When a doctor told him he needed to lose weight and that he was at risk of having a stroke, he took matters into his own hands and changed his diet, gave up the drugs doctors had prescribed him over the years, and hit the gym relentlessly. He knows that we have lost a lot of our greats over the years, and that he needs to stick around. One hundred pounds lighter, he looks like he did when he was first starting out at 17 years old, over 25 years ago. And the energy that runs through his new songs is rivaled only by his earliest work.

HIPGNOSTIC is a live hip-hop band from Charlotte, NC. Driven by powerful lyrics and creative instrumentation, HIPGNOSTIC is inspired to be fresh and delicious. The result is a fusion of hip-hop, psychedelic funk, and melodic rock.

BearCat Kringle, whose lyrical content ranges from straightforward to metaphorically obscure, has teamed up with familiar partners to produce creative compositions with a unique sonic palette. The players are Boss Jones on guitar and vocals, Joni Flynn on keyboards and vocals, Jacob Gresham on drums, and Jason Pentecost on bass. A shared vision inspires each musician to challenge himself to keep the work hypnotic and original.

The members of HIPGNOSTIC have played together since 2005 in varying incarnations and in front of thousands of people, from headlining sold-out club shows to sharing bills at numerous festivals up and down the East Coast. They are currently in the studio recording their newly hatched ideas for an EP to be released in early 2017.

As this reincarnated hip-hop machine again embarks on a mission to deliver a fresh take on new ideas, HIPGNOSTIC eagerly awaits the opportunity to drop an earworm into your head.