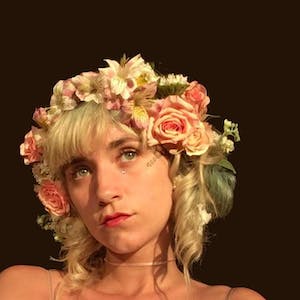 Wicked and wild, her sirens call an oil spill, floating atop thee languid waves of torment, a nanny-nanny-bew-bew to the ocean beneath, she caresses thee buoying masses, holding them aloft with thee effortless grace of a branch-bearing dove. Born from the dark, rich soil of West Virginia, raised in the clear, hop-scented country air, Sierra Ferrell cut her teeth on the rail lines, truck stops, street corners, and dingy, dimly lit listening rooms all across the land, belting out her old-time melodies, a sorcery, drawing her patrons, ever more deeply, into her animated tapestry of forlorn, star-crossed love, of longing, poverty, of suffering and triumph, encompassing that irreconcilable thrum of the human spirit and all the complexities of emotion that come with it.

One moment, with startling clarity, she calls to bear the opium opulence, that seductively solemn soujorn of the 1920s jazz club stage, the next, she'll have you taking to your toes, dancing in careless merriment, whirling, winking, and carrying on with all the confidence of a honky tonk king or queen, while she plays, sings, stomps, and yodels out the utter essence of the honky tonk country blues. You turn to your partner, peer into their eyes with the recognition of a perfect moment, and plant a kiss firmly upon their lips. They smile as your lips meet, pull you in tighter, romance... is born anew! Catch her now, folx, in this most intimate of settings, for her Star is ever on the rise!

Alan’s music “sounds like the product of a childhood spent listening to a cool aunt or uncle’s well-worn copies of ‘Everybody Knows This Is Nowhere’ and ‘The Gilded Palace Of Sin’, with ‘Exile On Main Street’...” - No Depression Magazine

“Alan isn’t just versed and influenced by the Americana and alt-country byproducts, but the old school country and rock origination points of the music, and you can hear this in his sound that is intelligent, lively, and multi-dimensional.” - Saving Country Music