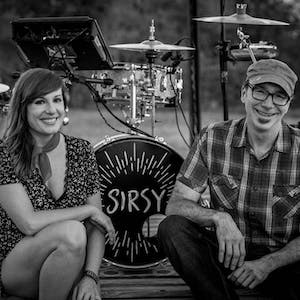 iCal
Google
An evening with SIRSY at Free Range Brewing!

SIRSY is a rock and soul duo with lots of pop sensibility and just the right amount of sass. The Boston Globe sums it up, “Little band. Big Sound.” No more needs to be said. Although the only thing “little” about Sirsy is that there’s just two of them. The rest is bigger than a T-Rex.

Close your eyes and listen to the power and heart in their music and you’ll swear there’s more than two people on stage. It’s crank up the volume, sing along at the top of your lungs music — even when the ballads kick in. Plus, “Their clever, smart songs have more hooks than a tacklebox.” (-Times Union).

“One of most powerful and flexible voices you’ll ever hear. (-Times Union, NY)

SIRSY is fronted by powerhouse vocalist Melanie (Mel) Krahmer, who is described as “one of the most powerful & flexible voices you’ll ever hear.” (-Times Union). Aftertaste Magazine said, “Bursting and belting out emotion and substance, she can be the queen of ‘in the groove’ rocking or be simple and delicate.” Still, there is more to Mel than her soul-inspired vocals: she also plays a full drum kit while standing up (she’s been featured in Modern Drummer Magazine and is officially endorsed by Paiste Cymbals and Vater Percussion). At their live shows, Mel also plays bass parts with a drum stick (on a keyboard mounted on her drums). She even throws in an occasional flute solo, too.

Guitarist Rich Libutti plays a well-loved and road-worn Rickenbacker through a pedal board full of vintage effects. “The guitar player is flawless and raw. Clean enough to be enjoyed, and just edgy enough to make you grin.” (-SXSW Music Blog, Austin TX). Live, Rich also plays bass on a keyboard with his feet.

Sirsy has played over 250 shows per year nationally for the last 10 years. They average about 60,000 miles per year in their little white van aptly named “Miles”. They tour for a living. Although you’ll normally find them in the headline slot, they’ve also opened for: Maroon 5, Grace Potter and the Nocturnals, Train, RaRaRiot, Third Eye Blind, Collective Soul, Lifehouse, Blues Traveler, Cheap Trick, and many more. SIRSY has played official showcases at CMJ and SXSW as well as marquee venues like The Viper Room and Gramercy Theater.

Both Mel and Rich have theater backgrounds. So, their energetic live show often includes stories and laughter from the stage. Although the lyrics can be introspective and the power of Sirsy can get pretty intense, “there is no sadness there”, Mel says. On stage they radiate joy. “It’s just us being free and playing music…”

SIRSY is currently hard at work writing new songs for a follow-up to their latest EP “Sketches and Ghosts” and their most recent full-length offering, “Coming into Frame”. “Coming into Frame” was produced by Grammy-winners, Paul Kolderie & Sean Slade (Radiohead, Hole, Dresden Dolls, Pixies). SIRSY’s song “Cannonball” was featured on the hit tv show “Shameless” (on Showtime). Their music video for “Lionheart” was in rotation on MTVu and their song “Revolution” was the theme song for a PBS documentary “So Right, So Smart”. (The music video for ‘Revolution’ was also in rotation on HBO).

“Edgy-feel-good” and fun to watch…”

“Pouring their souls out and rocking the shit outta the crowd, was SIRSY … just phenomenal! SIRSY is NOT simply a two piece, they are a head scratching, ‘WOW!’ This is the complete package in a fun sized, rock and roll, smiling, laughing, have a good goddamn time with your friends, band!” (-SXSW Music Blog, Austin TX) “SIRSY is Highly talented, “edgy-feel-good” and fun to watch, you gotta go see them.” (-Houston Music Blog)