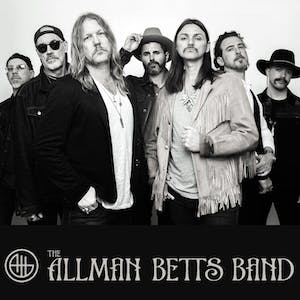 **Reduced Capacity: Neighborhood Theatre will adhere to safe opening protocols for venues as the state allows at the time of show.**

The sons of Gregg Allman (Devon Allman) and Dickey Betts (Duane Betts) have joined forces to form The Allman Betts Band. The show features new music, songs from their solo projects and classic Allman Brothers and Gregg Allman tunes in honor of the 50th Anniversary of The Allman Brothers Band. Their debut album, released on June 28, 2019, was recorded at the legendary Muscle Shoals Sound Studios and produced by Matt Ross-Spang (Jason Isbell, Margo Price, John Prine and Elvis Presley). Former Allman Brothers Band keyboardist and current Rolling Stones keyboardist, Chuck Leveall, and former Greg Allman Band Hammond B3 player, Peter Levin, both guested on the record. ABB’s sophomore effort was also recorded at Muscle Shoals with Matt Ross-Spang producing and it is due out in the early summer of 2020.

For guitarist and singer-songwriter Jackson Stokes, great musicians make great neighbors. Even as a youth weaned on classic rock- his first concert was Lynyrd Skynyrd- Stokes was unaware that living across the street from his St. Louis home was guitarist and singer-songwriter Devon Allman. Allman’s family tree is impressive as the son of Gregg Allman and nephew of Duane Allman of Allman Brothers Band fame. Yet, Stokes knew little of the legendary group. Encouraged by his father, and holding his guitar, the 11-year-old Stokes knocked on Allman’s door.

Allman, two decades his elder, heard something special in the young Stokes and encouraged him to continue learning and growing as a musician. Stokes dutifully attended Allman’s Honeytribe rehearsals, sitting quietly in the corner while the group worked up its repertoire. At 14, Stokes had developed into a prodigious firebrand with a passion for the blues, teaming with another area wunderkind, Marquise Knox, and performing his first professional gigs.

By 18, his experience playing in high school garage bands, and with an All-State school jazz band, expanded his rock-and-roll palette. He attended Drury University in Springfield, earning a degree in music therapy, while maintaining a friendship with Allman, who encouraged Stokes to further sharpen his songwriting skill. In Memphis in 2012, Allman produced a five-song EP, Witness, from the Stokes-led band, Delta Sol Revival.