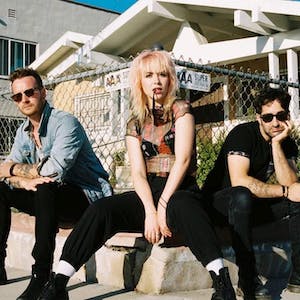 By its very nature, the fox is a deceiver. Seen from a distance it barely even looks wild. Sleek and refined, alarming only in its beauty, it almost begs to be made a pet. But make no mistake – those teeth are sharp, and a loner’s life calls for ferocity.

The same is true of The Foxies, the indie pop foursome now prowling a melodic crossroads of new-wave glam, punk rock, and high octane dance-floor fire. Based in Nashville, Tennessee, the band’s roots stretch from the wide-open expanse of Arizona to the tangled urban jungle of New York City, created by front woman Julia Lauren Bullock and featuring guitarist Jake Ohlbaum, and drummer Rob Bodley.

A kinetic blast of back-alley grit and tightly-wound flamboyance, their live shows are defined by an unlikely but danceable combination of sensual vocals, grungy guitars, fat-bottomed beats and shimmering electronic hooks, making them surprise standouts at the 2018 Sundance, South by Southwest and Bonnaroo music festivals. Likewise, enigmatic recordings like the Oblivion EP, the femme-fatale anthem “Be Afraid Boy” and the sticky sweet “Chewing Gum” have earned the band praise from Native magazine and Nashville’s Lightning 100 radio, as well as inclusion on Volume 63 of NOW That’s What I Call Music.

Gearing up for more mischief in 2019, The Foxies return March 8th with the punchy power-pop fantasy “Dreaming” – a decadent, delirious cry out for days gone by and romantic promise squandered. The single will be part of a brand-new EP titled Battery, four energized songs Bullock describes as the band’s most “raw and authentic” incarnation to date. Darker themed, richly textured and crafted with Nashville’s heart-on-your-sleeve creative ethos, the set also includes the quirky cosmic love story “Moon Man,” the connection craving blood pumper “Hand On My Heart” and the piano fueled bad-medicine ballad “Battery”. “We wanted something that opened the door to our world, and allowed the listeners to feel what we feel,” Bullock explains. Battery arrives April 5th, with much more lying in wait.