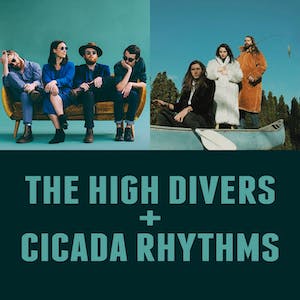 The High Divers have been covered by Rolling Stone, Paste, Performer Magazine, KDHX, practically every outlet in their hometown of Charleston and are consistently named one of the best bands in South Carolina. Now, with their new Sadler Vaden-produced EP, Ride with You — an emotion-clad and wholly triumphant project — this four-piece are poised to break out on a national scale.

“Sadler wanted us to really focus on songs that were entwined with our lives and real experiences, which got us writing from a much deeper level. There are songs about losing friends to suicide, trying to live with gratitude while struggling with PTSD, abusive relationships, busting out of your close-minded hometown, and finding peace falling in love with yourself and someone new. We would play Sadler a bunch of songs, and then we’d play one that was really close to our chest, and he’d say “Why didn’t you play me that one first, that’s the song!” We were hiding from songs that felt too vulnerable and raw, while that’s exactly what he was looking for.”

“I’m still kickin’!” frontman Luke Mitchell howls with guttural intensity on the closing track. “Still Kickin’” is the snow-capped peak of this new batch of music and the statement piece of the band members’ lives in this moment. “It happened so fast / Do you understand how lucky you are to be sitting here?” he provokes the listener to engage with their state of being, as well. The air slips out of his lungs in hurricane gusts, but it’s his conviction that is especially moving.

The raw, unsettling realization that life could slip from your grasp any minute is the bedrock of the EP, which was recorded at East Nashville’s Jeremy Ferguson-owned Battle Tapes Studio. The band, consisting of the married Luke (vocals, guitar) and Mary Alice Mitchell (keyboards, vocals), Julius DeAngelis (drums) and Kevin Early (bass, vocals), learned that hard lesson nearly two years ago when their touring van was T-boned by a semi-trailer truck. They rose out of the wreckage with broken bones, deep scars, and a new perspective on human existence.

Swelling with melancholy, the title cut “Ride with You” mourns that empty feeling born out of small-town life and needing something more reinvigorating, while “Stick Around” is an urgent call-to-action in the wake of numerous friends falling prey to suicide. “If you’re hurting, your house is haunted / You just need a friend around,” Mitchell beckons, his hand extending in an enveloping token of compassion.

Out of Hilton Head Island, the band members played in various entities, including multiple cover and original bands in their youth, but wouldn’t link up as a proper collective until 2014. With Mary Alice calling upon her classical piano training, she would seamlessly add a whole new element that would perfectly compliment Luke’s songwriting sensibilities, where her gifts have never been more suited. Her voice, a force of its own, is a perfect counter-balance to Luke’s woody timbre.

Mary Alice and Luke tied the knot two years ago, and that romantic entanglement allows the band to display even more heart and tremendous amounts of sacrifice. “Being married and out on the road can be challenging, but we make a good team and have a good support system in place. We are each other’s creative counterpoint, and we’re constantly working. We have to remind ourselves to try and have a day off every now and then, to do normal ‘married couple’ things.”

Ride with You was born out of struggle, but across these six tracks, there emerges warmth, love, understanding, and freedom. “Having to do the thing you’re most afraid of for your job is hard. We're a little more nervous than we used to be driving from city to city. It’s really put touring into perspective for us. We always took it seriously, but now, it’s much more so. We always hold it in higher regard,” says Luke. Mary Alice chimes in, “We try to give it our all onstage because it’s like...what if I don’t get to do this tomorrow?”

The High Divers have never sounded better. Even as they are forever haunted by that fateful day, their spirits are intertwined together in a powerful new way. This new EP then underscores their courage, determination, grit, and ability to forge an even brighter future against all odds. Working with Vaden as a producer helped them find a sound that they are excited to share as they continue to tour the country.

“Working with Sadler was one of the highlights of our creative lives, and his ability to cut through the bullshit and get at the heart of the song was so refreshing. This is some of the best work we’ve done as a band, and Sadler was there in the trenches with us the entire time.”

When Cicada Rhythm hit the road in support of their 2015 debut, they were a homespun, stripped-down folk duo, armed with songs that mixed acoustic instruments and soft dynamics with the intimate charm of two harmonized voices.

Three years later, bandmates Andrea DeMarcus and Dave Kirslis have upsized their sound considerably with Everywhere I Go. Recorded in a string of studios across the southeast, it's a snapshot of a band on the move, with new members filling their lineup and a louder set of influences propelling their sound forward. There are roots-rock tunes, slow waltzes, politicallyminded lyrics, front-porch folksongs and backwoods ballads, all delivered by a group of road warriors who've cut their teeth not only in the writing room, but onstage, too.

"In the beginning, we were two singer/songwriters making a living on $50 per show," says DeMarcus, a Juilliard-trained bassist who met Kirslis — her bandmate and future husband — when he hopped off a freight train and landed in her Georgia hometown. The two quickly whipped up a musical chemistry rooted in the steady pluck of DeMarcus' upright bass, the rootsy punch of Kirslis' guitar, and the raw blend of their voices. As romance blossomed between the musicians, so did a career. "We had to keep it a duo," DeMarcus remembers of their early days on the road, "because we couldn't afford to bring along anybody else. When we released our debut record, we started touring with a drummer, and the sound just evolved from there. We realized we needed to demand attention, rather than waiting for people at the shows to shut up."

People did pay attention, taking notice of Cicada Rhythm's ability to merge both traditional and contemporary Americana sounds along with topical lyrics, which often touched upon modern issues like environmentalism. Among the band's biggest fans were members of two A-list Americana bands: Kenneth Pattengale, best known as the spellbinding guitarist and harmony vocalist of the Milk Carton Kids, and Oliver Wood, lead singer and guitarist for the Wood Brothers. When it came time to record Cicada Rhythm's newest batch of songs in 2017, the 12-song set was produced by Pattengale, with additional production by Wood on 3 songs (“Do I Deserve It Yet”, “Shake Up” and “Even In The Shallows”.

A sense of forward momentum sweeps its way throughout Everywhere I Go, whose very title conjures up the image of a band in transit. Kicking off with "America's Open Roads" and winding to a finish with the Bob Dylan-worthy "Back Home," it's an album written during a time of travel, of growth, of being together. Like interstate poets, DeMarcus and Kirslis write about the country unfolding outside their car window at highway speed, spinning stories not only about the places they visit, but personal and social struggles, as well.

An Appalachian-sounding anthem for the female empowerment movement, “Do I Deserve It Yet” takes a look at the modern woman's struggle in a man's world as DeMarcus wails in the chorus, “Won't you tell me when I am enough? ‘Cause I can never tell.” “America's Open Roads” resonates similarly in today's climate of division and controversial leaders, with the emotionally hard-hitting opening line, "Every day starts with a terrible dream." Although written outside of political context, these songs took on new meanings once Cicada Rhythm began integrating them into their shows.

"We were touring up the East Coast one week after the election, and the nation was visibly shook up," says Kirslis, who shares vocal duties throughout the record. "Suddenly, a lot of Andrea's lyrics seemed to have double meanings. The song is about keeping roads open, rather than build walls over them. As we began playing more and more new songs, they began paralleling some things that were going on in the outside world."

Fans of Cicada Rhythm's debut will remember the socially-conscious "Do Not Destroy," an eco-friendly song that urged its listener to take care of the natural world. Much of Everywhere I Go follows in that song's footsteps, forming a bridge between the two records.

Producers Pattengale and Wood assisted in that growth by beefing up the band's sound with strings, Hammond organ, electric guitar, and pedal steel. Working with the producers separately allowed Cicada Rhythm to revisit and revise a number of songs that had already become live staples. "You can't underestimate the power of a fresh set of ears," DeMarcus says. "It's helpful to know what someone else thinks your song can be, particularly someone who hasn't heard the song nightly for the past two months. A lot of the time, collaboration is the reason something becomes better."

Embracing Everywhere I Go as "a patchwork album," Cicada Rhythm tracked its 12 songs in recording studios, living rooms, and gospel churches throughout Tennessee and Georgia. Some songs were performed live in the studio and captured on analog tape, while album highlights like "Even in the Shallows" were tracked more methodically. String sections were added — a nod to DeMarcus' fondness for the Beatles, whose own songs often made room for symphonic arrangements — without taking away from the band's rustic charm. Together, the album's track list blends orchestral folk-pop and ramshackle roots-rock in equal numbers, giving Cicada Rhythm more fuel for their music-filled travels.

"We named the album after a line in 'America's Open Roads,' but hopefully, this album will be our ticket to everywhere we go," explains DeMarcus. "Wherever we are, these songs will be with us.”