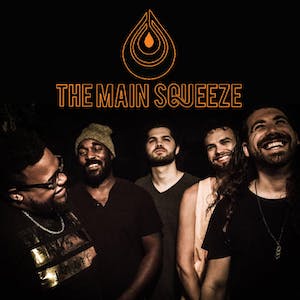 The Main Squeeze, with deep musical roots sprouted in the Midwest, have scored their lives at each twist and curve. While starting out as a party band at Indiana University, their forthcoming April 28th release “Without a Sound” illustrates their increasing musical maturity and creativity inspired by their new home in Los Angeles.

If maturity comes with experience, “Without a Sound” reflects this. The Main Squeeze has spent several years building their foundation since being championed by producer Randy Jackson: they have played Red Rocks; shared the stage with The Roots, Aloe Blacc, Jane’s Addiction, Umphrey’s McGee, and Trombone Shorty; and performed at music festivals like Bonnaroo, Electric Forest, Summer Camp, and High Sierra.

The Main Squeeze is a blend of soul and hip-hop, funk with rock. They know their sound is “soulful, powerful, and unique” (Newman). Rolling Stone agrees in their recent critique of a live show: “Lead singer Corey Frye’s powerfully soulful vocals forms the foundation of an energetic set.”

These underpinnings are important yet The Main Squeeze’s true focus will always be to “strive to reach people” through their beat loving heart in their music. “We are devoted to making great music for people to get lost in and to feel real emotion and love, and also to dance and enjoy life. And it’s only just the beginning” (Newman). Billboard believes they have touched on this goal: “Funk runs deep in their DNA. Dare you not to two-step.”

The beats on “Without A Sound” are plentiful and it is balanced with emotion, a mix of vocals, and instrumentation of the band. Their vibe is simultaneously timeless and futuristic as they are inspired by the greats, yet have found a way to infuse their own genius into the mix.

The Main Squeeze appeals to your head, heart and body.

Twin brothers Eric and Kyle Travers have been making music and stunning audiences since they started playing music together at 7 years old.

In 2012 the brothers formed their latest project, Travers Brothership, a Soul/Funk/Rock/Jam ensemble based out of Asheville, NC with Ian McIsaac on keys and percussion.

There is a reason Travers Brothership stands out among most acts on the scene today, they care to make each concert a unique and unforgettable experience. Utilizing the band’s unmatched live energy, instrumental prowess, and 3-part harmonies; they create a live atmosphere that transforms an audience into a community. A Travers Brothership concert is best described as a wild block party, and this is a party you don’t wanna miss. ​ Following the success of the “I Don’t Mind EP” the band began touring nationally in 2013 and has since performed 400+ concerts across the United States. The band has shared the stage with many accomplished acts such as: Charles Bradley, Taj Mahal, Moe, Kyle Hollingsworth Band, Blues Traveler, Robert Randolph, Leftover Salmon, Trombone Shorty, The Marcus King Band, Dr. John, and many more.

In 2014, Josh Clark (Bass & Vocals) climbed aboard Travers Brothership. This lineup change finalized the current roster of the band, enabling them to perform the 3-part harmonies that define their current sound.

“A Way To Survive” was released in 2016 to critical acclaim and outstanding reviews. The album has won numerous awards including “Best Studio Album of 2016” at Homegrown Music Network, and has received airplay on radio stations throughout the U.S. and beyond. The band has won numerous other awards including: Winner in Raleigh NC’s Band Together Competition in 2017 and placing runner up in Floydfest’s On-The Rise Competition in 2018.

Travers Brothership just completed work on their sophomore LP, “Let The World Decide” at Echo Mountain Recording Studio’s and The Eagle Room in Asheville, NC. The album is due out on December 8th 2018.

In January of 2019 the band will embark on their first tour of Europe, and then return to the US to tour in support of “Let The World Decide” for the remainder of 2019.