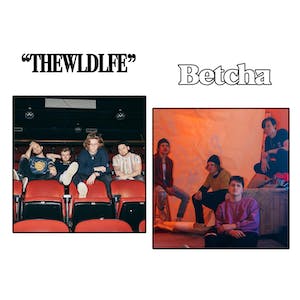 THE WLDLFE is an indie-pop band from Anderson, IN formed in 2016 by frontman, Jansen Hogan, and few of his college friends – Jason Boucouras, Jack Crane, Geoff Jones – later joined by his younger brother Carson Hogan. The band’s first two releases, “New” and “ILY”, were a grassroots success receiving positive reviews from indie publications, receiving airplay on over 90 college radio stations, and even receiving tweets from Hollywood A-Listers Abigail Breslin and Chloe Grace Moretz.

The band’s first full length album “I’m Not Worried Anymore” was released at the end of 2018 whose music received great write-ups in Billboard Magazine, Live Nation’s Ones to Watch, Earmilk and many others with its lead single “I Don’t Mind” being featured in Spotify’s coveted New Music Friday. Live Nation said “THE WLDLFE has an alt-indie sound packed full of striking lyrics and decadent instrumentation. The vocals of frontman Jansen Hogan are effortless in themselves, but the electropop effects used on his voice make them pure nectar to the ear.”

In 2019, the band released a new set of singles grabbing major support from Spotify in their popular playlists, “Young and Free” and “Night Pop”, as well as tons of Topsify love on Alternative Nation, Alternating Currents, Tomorrows Hits, and Indie Darlings.

The band has opened for Halsey, The Band Camino, COIN, and VHS Collection among others and now has over 16M cumulative steams. Fresh off the road from Nightly’s sold-out national tour, THE WLDLFE is poised for 2020 to be their breakout year.

As freshmen in 2015, Charlie and Ben started jamming together, writing songs, and filming acoustic videos. Both avowed Kings of Leon fans, the boys cold-emailed one of those D.I.Y. videos to GRAMMY® Award-winning producer Jacquire King [Kaleo, James Bay]. Impressed even at this early stage, Jacquire encouraged them to “keep going, get a band together, and send more music.” Throughout the summer of 2016, Charlie and Ben welcomed Taylor—who transitioned from guitar to bass in order to join—and Chase. Soon, the guys found themselves in the studio cutting demos with Jacquire behind the board. Building a profile, a deal with Atlantic Records followed a standout 2017 gig at The End in Nashville

Their 2019 debut EP Falling was released to critical acclaim with praises from American Songwriter, Baeble, Ones to Watch, and LADYGUNN, and received significant Spotify playlist support including: Rockin’ Vibes, It’s ALT Good, The New Alt, License To Chill, and California Rock State.

They went on to attract a growing fan base by cutting their teeth on national tours alongside Kaleo, NEEDTOBREATHE, Judah & the Lion, Mat Maeson and more. Writing out of a basement work studio, hanging out constantly, and even attending the same gym, the musicians pushed each other creatively.

Graham and Miles Laderman have been playing music together since they could pick up an instrument. They met Val Hoyt, another lifelong musician, in Atlanta and he soon became like a brother to them. After playing together around Atlanta for about four years, the band members began their separate moves to Nashville and one by one.

While it was difficult during this process to stay connected and maintain a band 'long distance,' the necessity and yearning to play together never wavered. The connection they had made (soon to be joined by Noah Christian) was hard to rival, and knowing what each member was capable of, both with an instrument and without, made for an unmatched brotherhood.

In the fall of 2017, life changed for the band. Graham left school to focus on music full time, Miles was finally able to make the move to Nashville, and they linked up with their newest member and brother, Noah Christian. Now, with everyone in the same place and a complete lineup, Hardcastle began making a name for themselves.

Hardcastle charted on Spotify’s Viral 50 charts nationally AND globally, thanks to an amazing fan-base that they began to connect with on Twitter. They started touring numerous cities in the US, most notably with The Band Camino; they also played most recently in Knoxville at UTK's Volapalooza (with acts such as Juicy J and Zella Day). Hardcastle also continued to experience success in the Nashville area, selling out The High Watt as well as filling the Mercy Lounge.

Today, the band is tighter than it’s ever been. Graham, Miles, Val and Noah are focused on music full time, while sharing the same house in Nashville. After a summer of hard work and self-discovery, they are beginning a new chapter with the releases of ‘I Never Knew’ and ‘Invisible.’ Part of this growth involved the band re-assessing exactly who they are and the evolution of their sound. Because of this new direction, they have decided to take down previous works from major store fronts and begin with a clean slate. A total re-set.

Hardcastle will build a name for themselves off of authentic and personal songs that have come from hours of hard work and introspection. It’s about loving the process…it's about brotherhood…it's about the shift in mentality from instant gratification and entitlement, to a love and appreciation for the songwriting, the music itself and the hard work it takes to get there. Be sure to keep up with Hardcastle’s next moves on all major social media platforms.