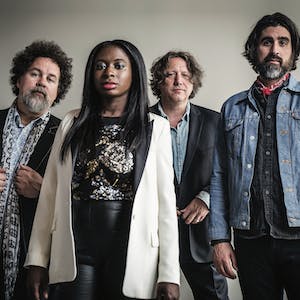 “We’ve come Full Circle And Then Some,” goes the chorus to the title track of Trigger Hippy’s sophomore album, and it’s the perfect description of the long road these experienced musicians have traveled to harness their collective roots – from country, Delta blues, R&B and gospel to Southern rock and funk. Trigger Hippy co-founders, former Black Crowes drummer Steve Gorman and songwriter bassist Nick Govrik, believe the band’s sophomore album, on Turkey Grass Records distributed by Thirty Tigers, embodies the music and vision they’ve chased since the two met 15 years ago.

For Steve, working with Thirty Tigers is personally significant: it reunites Gorman with Thirty Tigers founder/owner David Macias. Over 30 years ago, Macias played a pivotal role in the development of first recording contract for The Black Crowes.

“We hit it off right away,” says Govrik, whose own love of southern rock icons like Lowell George, Leon Russell and Levon Helm can be heard throughout. “Steve was like a freight train barreling from the get go. He played the show like it was Madison Square Garden, and we just been doing it virtually non-stop ever since.”

For Govrik, who’d spent more than a decade with his ‘90s group Highwater, a “boogie-woogie, dance bar band”, and recorded three albums at the famed Muscle Shoals studios for Mississippi blues label Malaco. he longed for another opportunity to be part of a group, and Trigger Hippy more than fit the bill.

The first incarnation of Trigger Hippy took place in 2009 at a benefit for the Allman Brothers Big House Museum at the Cox Capital Theatre in Macon, GA.

“We were just a full-on rock jam cover band initially,” says Gorman, looking for a new direction after his roller coaster ride as co-founder of the Black Crowes – which he details in his upcoming memoir, Hard to Handle: The Life and Death of the Black Crowes. “But once I heard Nick’s songs, I realized his tunes were a great starting point for us. We share a common sensibility across the board about music.”

In 2014, joined by singer Joan Osborne and guitarist Jackie Greene, the band released its self-titled debut on Rounder Records, taking a “let’s see what happens” approach, performing some 40 live dates over seven months.

Says Gorman: “Nick and I always pushed for more of a commitment to become a functioning, fulltime band, but everyone had their own things going on, which made it difficult to keep that lineup together. We always had a vision and an idea of what we wanted to do.”

After a lengthy break, a new lineup emerged with multi-instrumentalist and vocalist Ed Jurdi (Band of Heathens) and vocalist/sax player Amber Woodhouse joining Gorman and Govrik. “We took our time -- we knew the chemistry had to be right. With Ed, we found our new direction right away and when Amber came along, we knew we’d found the final piece.”

“This is the culmination of a 15-year conversation, and I mean that literally and musically,” explains Gorman of his partnership with Govrik.

It’s no surprise that Trigger Hippy is built on a rhythm section because each song on Full Circle and Then Some starts with a solid foundation that underlines its many strengths.

According to Govrik, Full Circle and Then Some is the band’s story to this point. “We never really wavered, we just kept going. We’ve come full circle because we believed in each other, even with the changes this band has been through…new lineup, new commitment.” He concludes, “We’re doing this the way we want to, the way we want it to sound…and that’s the beauty of this.”

Forged out of a common love for timeless rock ‘n’ roll and legendary live performances, RevelWood Mission emerged in 2017 with their first release (The Lansing EP), delivering a soulful, driving new sound to audiences throughout the Southeast.

With a style that is raw and powerful yet intricately woven, their musical tapestry is rich with dynamic guitars, atmospheric keys, 3-part harmonies, and a commanding rhythm section that brings the listener along for the ride.

At times relentless and at others elegant, RevelWood Mission swings seamlessly between bluesy, riff-driven rock songs and intimate lyrical ballads, displaying well-crafted arrangements that can tell a three minute story or sweep into an epic and unfolding journey.

“Revelwood Mission deliver the spirit of rock and roll in a nostalgic way that echoes the classics we all grew up with.” -Ryan Pickett (front of house sound: My Morning Jacket, Jim James, Ray Lamontagne)